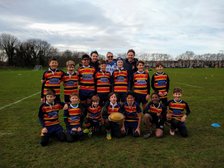 Kings U12s made a bright start to the 2019 Surrey Rugby Waterfall Competition. Competing in the Treasurers' division, the first round saw Kings paired against Barnes RFC, a side that, despite the clubs' geographic proximity, this age group had never faced.

While the weather was unseasonably mild, a strong northeasterly made a significant contribution to the course of play. Barnes elected to start upwind; Kings were ready though, and Charlie opened the scoring for the visitors with a well taken medium distance try. Barnes wasted little time in replying, scoring three tries in quick succession (and had another two called back for miscellaneous infractions), largely behind the wide shoulders of their huge No. 8. Looking like the beginning of a long day at the office, the boys' heads dropped a touch until Nick H shook off a questionably high lunging tackle from behind to score, leaving Kings with only a one try deficit going into halftime.

The second half saw Kings become much more effective getting the ball into the hands of Joven (himself stripping away at least three balls over the course of the match), who scored twice, as Barnes had no answer. Nosing ahead, and with the wind at their backs, Kings began to take control. Benjy managed to shake loose and reach the try line with one of his patented dummy runs. Desmond anticipated the bounce of a Kings kick off, grabbing the ball above his head and sprinting straight up the middle, unmarked by the opposition who were, with the rest of us, wondering how exactly that had happened. Nick H doubled his tally as Barnes began to flag. Nick S scored off the breakdown for a well spotted 1 yard strike. Etienne closed the books on an unanswered seven try half with a long run down the left flank.

All in all a very good days work, and much more reminiscent of last seasons' heroics than what had been on display earlier this season. Excellent work in the ruck. Good protection of the ball and superb use of space. More like this please!