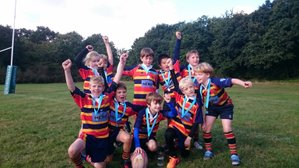 Kings U9s make an impact at their first festival of the season!

The Kings team were raring to go for the first tournament of the season and of contact rugby, and their first opportunity to put their much practiced tackling to good use.

Match one – starting as they meant to go on with a decisive victory over Dorking. Adrian, Julian, Scott and Daniel all scythed through the Dorking team to score tries. Score 7:5

Match two – even better – another victory by a large margin over Wimbledon Warriors. Great tackling from Lauren, Adrian, Henry and Lucas gave us three turnovers. Score 6:2

Match three – so near, a nail biter as we approached the final whistle on 5 all, only for a final try from Warlingham to clinch victory. Highlights included Callum, Julian and Leo both weaving through the Warlingham team almost the length of the pitch to score. Score 5:6

Match four – Rosslyn Park were tipped as the team to beat – but they couldn’t beat us this time. Another close match with final victory to Kings. Fantastic tackling from Ali, Scott and Daniel gave Kings turnovers again. Score 5:4

It was fantastic to see the team tackling so well, with all the boys enjoying putting their new skills to use. They haven’t forgotten to support their team mates and working as a team to score. Julian, Adrian and Scott being awarded top three tacklers. Well done!

Three matches won, and the one we didn’t was so close. Many thanks to Andre, Tim and Ian for coaching and Heidi for organizing us all. Roll on next week and the King’s festival...