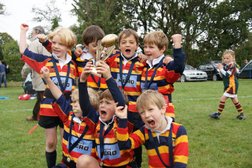 A great weekend all round for the U9's!

A great weekend all round for the U9's

Those at Old Cranleighan’s got stuck in with lots of new drills and refused to let proper rugby weather of mud and rain put them off. The team had lots of fun and won the tackle bag race to much excitement all round. The session finished with a competitive match which everyone enjoyed - followed by chips – which seemed to go down even better!

The boys and girls arrived at the London Scottish ground on top form. They certainly looked a lot better than a couple of the parents who had clearly enjoyed Saturday’s great match at another pitch a mile or so down the A316.

First up was Richmond, our hosts for the day. It was a tough match that showed how far the team have come on this season with some great passes and some committed tackling with successful turnovers. 2 tries for King’s from Adrian and Julian, and despite a last minute attempt for a final try, it ended in a 2:2 draw. The second game was against Beaconsfield. Beaconsfield were a tough team. The try we scored was hard fought and the ball wasn’t over the line until every team member had done their bit in driving it forward through a strong defence. Julian was able to break through the defence and we thought we were in with a chance to equalize but it wasn’t to be. Sadly the team lost this one 1:2.

Next up was Blackheath. King’s came back to the pitch with renewed determination but Blackheath were a strong team. By half time, King’s were 0:2 down. But King’s weren’t going to be beaten. After half time the team delivered tackle after tackle to score an early try by Henry quickly followed by Adrian and Julian. Everyone in the teamed contributed to a strong performance. Just minutes to the end of the match Adrian managed to score a final try to end the match 4:2.

In the second round our opponents were London Irish. This was by far the toughest match of the day. King’s started well and battled through the first half to find themselves 0 – 4 down. Every player in the team delivered relentless tackle after tackle and when they saw opportunities did their best to move forward through the London Irish defences. Julian’s sheer determination and courage to break through was finally rewarded when he scored King’s only try of match to end 1 : 7.

The team’s passing skills were complimented by a Richmond coach and their sportsmanship was complimented by a Beaconsfield parent for helping opponents get up after hard tackles by King’s. Most importantly the immense teamwork that was demonstrated throughout the tournament and the ability to fight back when behind and facing strong opponents showed a very significant step in the development of the team. Well done!

A few comments from the players at the end of the festival:

“It was a great festival. All of the players enjoyed it but the last match was really tough.”
“I think we need to put more effort into training and not be so silly and that means we’ll have a better team like London Irish.”
“It was a shame we didn’t win all of our matches but it was a good festival and it doesn’t matter if we don’t win if we tried our best.”