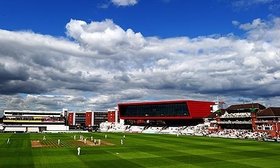 A Day at Old Trafford

Thursday 7th August saw the first day of the eagerly anticipated 4th Investec Test match between England and India, at one of the finest cricketing arenas on the planet- Old Trafford (excuse the northern bias).

Perhaps more importantly it was a fantastic excuse for a summer day out for four lucky members of KUCC, courtesy of our very generous kit supplier Kukri.
It was a beautiful northern morning ( yes, play did start 30 minutes late due to a slight dampness in the air), which allowed us plenty of time for a shandy and to observe some rather inept fielding drills from several Indian players.

MS Dhoni, argued by many to be one of the greatest captains of the modern era, promptly won the toss and for reasons known only to himself decided that batting first on a damp, cloudy morning at Old Trafford was a brilliant idea. This was indeed a brilliant decision- as long as you weren’t a member of the Indian top 6.

It would be harsh to criticise any individual as England’s opening bowlers blew away the top order with a fantastic display of quick bowling, ably backed up by a solid display by the slip cordon.
Fortunately, some backbone saw 8 for four become 152 ao, thanks mainly to a skipper’s innings from one MS Dhoni. It’s difficult to speculate, but I must say had the skipper returned to the hutch empty handed, he may well have been lynched by several disgruntled members of the Indian squad.

Still, 152 after winning the toss was a pitiful effort and ensured the England supporters were in fine fettle by mid-afternoon. Please note KUCC are avid supporters of the ‘drink responsible’ campaign, and as such observed the majority of the afternoon’s play quite contentedly from the alcohol free stand.

Alastair Cook threatened to score runs once more, but didn’t, and Sam Robson simply refused to play a shot at a straight ball. But apart from that, Gary Balance and Ian Bell spent the rest of the afternoon ensuring that by stumps England had all but cancelled out the Indian advantage.

Two late wickets were not enough to ruin a memorable day out for the KUCC boys, with a wonderful time enjoyed by all. Thanks once more to Kukri for the tickets and for the lads that represented the club at the ground.