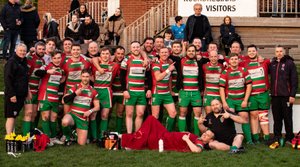 The stags had the game sewn up by half time leading 22 - 5 through tries from Jonty Glendinning (2) and Liam Everett, with Oli Mitchell kicking a penalty and converting 2 tries.
After the break the Stags increased their lead to 36 - 5 through tries from Leon Hobson-Sheriff and Oli Mitchell, who converted both.
Roundhegians hit back with a try and then a converted try but in between Adam Balderstone dived over in the corner too for out to enable Oli to kick the conversion.
A serious ankle injury to Nathan Berry, which necessitated an ambulance to be called, marred the later stages but Oli Mitchell completed the scoring with a try, which he converted to give him a match tally of 23 points.
The Plate was presented by Jim Chapman, former Chairman of the Aire-Wharfe Cup, to Stags captain Steve Welch.
A video of the game is available through the usual channels.

In the final of the Cup Competition at Skipton, the winners were Burley, who defeated Skipton 33-19.