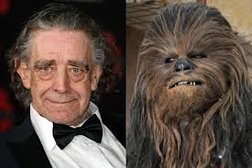 Keighley RUFC offers its sincere condolences to Peter's Family and remember the happy times when Peter was in Keighley.

Peter Mayhew passed away at the age of 74 on 30 April at his home in Texas with his wife Angie and their 3 children by his side.
Peter was a regular member at KRUFC for about a 10 year period in the late 80s and early 90s.
He became friends with KRUFC through his then partner, who worked with fund raising for Muscular Dystrophy and met our long serving members Dennis & Barbara Marklew, who's son died of the disease in 1978. Through that connection he came to live and work in Keighley during a long gap between productions of the Star Wars films.
In 1986, when Preston Grasshoppers came to play at our old ground at Marley, England RFU forward, Wade Dooley was pictured with Peter in front of our goal posts, with Peter at 7'2" towering above Wade's 6'8".

As one former Keighley 1st XV captain quoted: "Like many old members of the club, I'm sure, I was saddened to hear the news about Peter Mayhew's death. During my all too brief time at the club, Peter was one of the many highlights and happy memories I've cherished ever since. He was such a gentleman. I can't recollect exactly how he came to land up in Keighley - can't be many who had travelled so far across the galaxies - but I was honoured to know him a little. Both my 'kids' also remember him fondly and have called me today to reminisce. Never has a pint glass looked so much like a thimble in his hands; never has a Mercedes looked so much like a Mini! RIP Peter".
Keighley RUFC echoes these memories of Peter, who was always happy to meet children and give them a signed photo of himself as Chewbacca.