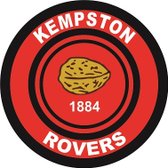 Kempston Rovers were formed in 1884 and entered the Bedford & District League. Rover’s first league championship was won in 1908 and twelve month later Rover’s retained the title while also carrying off the Bedfordshire Senior Cup and North Beds Charity Cup. Rover’s joined the South Midlands League in 1927, and while league honours eluded them they continued to enjoy cup success, winning the Senior Cup for a second time in 1938 and winning the Hinchingbrooke Cup in 1926, 1928 and 1932.

The Walnut Boys, the nickname coming from the large walnut orchard in Kempston, joined the United Counties League in 1953 and fortunes took an upturn. After winning the Second Division League and cup double in 1955, Kempston continued to enjoy success as the competition reverted to a single division. Rovers were champions in 1958 and runners-up in 1957 and 1960, while in the Knockout Cup they contested five successive finals between 1957 and 1961, winning the trophy in 1958 and 1960.

When the league returned to a two division format a lack of facilities saw Kempston placed in Division Two. The Hillgrounds facilities were upgraded but after being readmitted to the top flight they suffered instant relegation in 1963 with just five points to their name. A top division place wasn’t regained until 1968 when the Rover’s finished runners-up in the Second Division.

1973 saw the start of a new era as Kempston relocated to a new ground further down Hillgrounds Road. A magnificent season saw the Walnut Boys storm to the Premier title losing only once in 32 games. A golden period in the club's history saw League Cup successes in 1975 and 1977; the Beds Senior Cup was again captured in 1977 while the Walnut Boys reached the last 16 of the FA Vase in 1975. The club nearly folded in the early eighties and were relegated in 1983, but they bounced back to the top flight in 1986 before moving to the current ground, their third in the same road.

In 2002 Kempston Rovers and Kempston Colts began an alliance to pool resources/personnel under the name AFC Kempston but, unfortunately, the club suffered a fourth relegation from the top flight in 2003.
The beginning of 2005 saw the start of major re-developments at Hillgrounds Road with the building of new changing facilities and the building of an artificial training pitch. On the grass, the club fortunes on the pitch turned around which saw The Walnut boys only just missed out on promotion at the end of the 2005/06 season.

The new ground facilities were completed in 2006 and along with a new stand; on-going ground improvements and the existing clubhouse due for refurbishment shortly, AFC Kempston now have some of the best facilities in the area for non-league football.

In 2007 Rovers finished third in division one and the club gained promotion to the Premier Division after spending four seasons in division one. Unfortunately Rovers stay in the premier division was short lived and we were relegated back to Division one after just one season.

The summer of 2008 saw The Walnut Boys completely reshaping the management team, with closer links with Bedford College Football Academy, Dave Randall was appointed 1st team manager with John Guiney acting as assistant, John also managing our midweek Under 18 team and successfully winning The Bedfordshire FA U18 Midweek Challenge Cup beating a strong Stotfold side 3 – 1, for the first time in the clubs history. The senior team also reached the Final of The Bedfordshire FA Senior Trophy losing to 61FC Luton. During the 2010-11 campaign we were fortunate to be winners of Division 1 and also win the Hinchinbrooke Cup for the first time since 1932, which was an extremely proud moment for many Club members and one we hope can be replicated in the near future.

Midway through the 2013-14 Season James Stoyles and Gary Flinn took over the 1st Team duties, ably assisted by our Physio Andy White.

2015-16 Rovers won the UCFL Premier League, with a thrilling final win on the last day of the Season; this saw us move into the Evostik Southern League Central which represents the highest level we have attained within the FA pyramid system so far.

All at Hillgrounds are looking forward to the new season with both excitement and trepidation, and hope you will continue to support the Teams as and when you can.

We hope the future continues to bring rewards both on and off the Pitch, thus enhancing the experience for all our local Partners both old and new