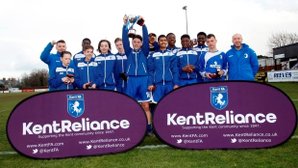 Kent Football United survived a late fight back from Welling United to secure the Kent Reliance Under 14s Cup on a balmy Sunday afternoon at Faversham Town’s Shepherd Neame Stadium.

A solitary second half goal from Leon Robson was enough for KFU to claim the Cup, but the Wings players and supporters will have been left ruing missed second half chances, just as Manager Jim Dean was.

Talking to Kent Sports News at the final whistle, he admitted shrugging his shoulders, “we’re desperately disappointed to have lost, but we had enough chances to score, but if we can’t hit the net from two yards, we can’t make complaints really can we?” He went on, “we tried to play the best football we could on a very bobbly pitch, but in the end, it’s congratulations to Kent Football United for their win!”

Naturally KFU’s boss Sam McNeil was a very happy coach. He told KSN “we had three really good chances in the first half, but couldn’t take any of them but with Gabriel (Ogunseril) and Leon (Robson) in our side I always believed that we would score because Garbriel’s got 39 in 19 games this season and Lee’s scored 30 plus goals from midfield in each of the last few seasons.”

“We were very tight at the back which was very pleasing. We knew where their dangers would come from and I think it worked very well!”

KFU enjoyed the better of the first half with Gabriel thwarted on two separate occasions and he would have been frustrated that he didn’t open the scoring, and on another Welling keeper Ben Reilly came out of his box and deliberately handled outside the box, and received “only” a lecture from the official, with many, including Reilly himself (from the look on his face) expected the red card to be shown!

Ogunseril’s chances then saw Reilly this time legally head clear to deny the KFU striker before after receiving the ball from his keeper Toby Smith, Ogunseril sprinted down the wing from just inside his own half before unleashing a shot that whizzed past Reilly’s right post, before on the stroke of half time, Welling created the best chance of the half.

As a KFU corner was cleared and as Cole Gordon raced onto the through ball, his first time drive was magnificently tipped over the bar by the flying Smith in the KFU goal!

As they went in at the break, there was the thought that perhaps Kent Football United had missed their chance, but within minutes of the restart they had the goal that their first half display warranted and deserved! A ball into the box from the right wasn’t cleared and as it fell to Robson, he brilliantly opened his body and steered it into the net beyond a despairing Reilly.

The goal at last pushed Welling into action and they created a number of good chances but just couldn’t find the back of the KFU net. Harvey Walker fired in a shot past the post with keeper Smith rooted to the spot; Neil Spencer then placed a shot inches wide after running onto a through ball before Rob Hughes hit the KFU bar with a swinging free kick.

It really wasn’t Welling’s day, as right at the death there was an incredible scramble in the KFU area which saw Welling miss a chance from two yards before an incredible reflex save from Smith kept his side in front.

A delighted McNeil admitted his delight in Kent Football United’s third major honour in three years. He said, “Three years ago, the girls won the Kent Cup; last year this side won the London Cup and now to win the Kent Cup and hold both during a calendar year is something really special.”