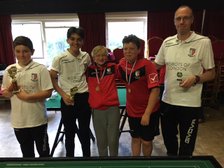 Kent retained the Team Plate at the Harrow GP.....

Kent had some winners at the second Harrow Grand Prix event of the season as the 'A' team of Paul, Mig, Jeremy & Alex (with Conor & Josh!) overcame Kent 'B' (Mat, Kye, Terry & Finn) again in the final 3-1 - a repeat of the first Harrow GP earlier in the year!

In the Individuals, Kye made the semi-finals in both the U15's & U19's whilst Jeremy made the Last 8 in the Veterans. In the Plates though Kent did have some success as Mat won the Vets 5th place plate, and Thomas beat Louis in the U19's plate.

There were some good performances over the weekend from all of our players including a fantastic win for Josh in the U15's groups stage with a 2-1 victory of U19's winner Noe Scheen from Belgium.

Next up - The World Cup in France!