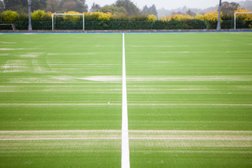 Keswick earn a hard fought and well deserved 3 points away at Urmston.

Keswick were keen to put the last two results to bed by grabbing a win away at Urmston. As expected, the changing rooms were lacking in their supply of toilet roll; it was nice to see that nothing had changed since the 1s last played an Urmston side at Wallacre High School.
Keswick were in high spirits with a full bench and point to prove against a side who had been recently been relegated through an apparent breach of league rules.
The game started with Urmston pressing the Keswick defence hard. Within the first 15 minutes of the game, Keswick conceded 4 penalty corners. But thanks to the return of Gary Tupper to the side, all 4 shots were expertly saved. Keswick began to build their confidence and starting making more sustained attacks on goal. Ben Harrison came off the bench and made an immediate impact by winning possession and firing across goal to Rob Cook who just missed the target. Robert Owen, making his first game from injury, came off the bench and within seconds gained possession of the ball, launched it into the D for Rob Cook to deflect the ball past the keeper and open the scoring. Urmston fought back a few moments later, and with the help of a few fouls missed by the umpire found their striker at the top of D and slotted the ball bottom right to level the score. Half time 1-1.
The second half started with Urmston once again piling on the pressure and forcing the heart of Keswick's defence to keep on their toes; luckily Chris Mattear and Jamie O'Shea were on form and soaked up their advances. Half backs Thomas Morgan and Clive Swanston were instrumental in turning over Urmston's attacks and Keswick gave as good as they got. Ben Harrison kept on impressing in attack by hounding Urmston's defence on several occasions, and Rikki Barnes' read the game perfectly; intercepting several of Urmston's passes around the back which lead to an excellent break by Mark Proctor who skilfully made it into the D one on one with the keeper. Proctor slipped the ball left to Luke Heap who was on hand to secure the lead. Solid performances in the middle from Mark Bowen, Shaun Wilson and Charlie Jackson kept further Urmston advances at bay as Keswick held on to earn 3 points. Full time 2-1.
Share via
FacebookTwitter
https://www.pitchero.com/clubs
Recent news