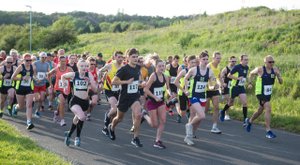 Results from the 1st race of the 2019 Fast & Furious 5K series held on Wednesday 22nd May.

This years’ Fast & Furious 5K Series got off to a record breaking start as once again the race organisers laid on ideal conditions with a pleasantly warm and still evening.

The evening saw a record turnout of 99 finishers including 28 from the latest Couch to 5K group, successfully completing their goal on the testing 3 & 3⁄4 lap course. Also both the male & female course records fell thanks to the Richardson siblings William & Chloe.

William, who competes for Birchfield Harriers, blasted away from the start and with a storming last lap completed the race in a seriously quick 14 min 50 sec. In second place was Luke Sheppard of Worcester AC clocking 16-58 with Chloe Richardson (also Birchfield Harriers) finishing third overall with a time of 17-17.

The organisers are hoping for an equally successful night for the second race on Monday 24th June, even if it means paying out for new course records.

The race turned out to be more successful than we thought initially. Once the results appeared on Power of 10 (RunBritain) it was clear that a large number produced Personal Best times for 5K.
Even though many people record the course to be long on their GPS devices this is down to the accuracy of GPS measuring long on the bends. The course has been accurately measured and can produce fast times.

Full Results (Excel) can be found in the link below or in Documents in the Information Section.