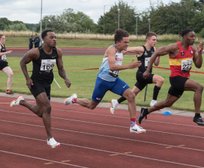 A new Open athletics competition at Stourport Sports Club organised by Kidderminster and Stourport Athletic Club on Sunday 8th August saw 400 athletes from far and wide descend on the town to compete at the highest level of grass roots athletics.

The event was held in honour of Mike Lambert and bore his name. Mike was a stalwart of the Athletic Club for many years, initially as a parent to two of the club’s highly talented athletes, then as a competitor himself and in recent years coaching up and coming throwers.

Mike was in the process of helping to organise the Open competition when he unexpectedly passed away in May, not long after his 58th birthday. As a fitting tribute it was decided to carry on and Mike’s son Jack took up the mantle to help make the day a success. Jack worked tirelessly on the schedule and in co-opting track and field officials to attend and help the day run smoothly. Jack also secured valuable sponsorship for the athlete numbers from local sportswear supplier Powergrip Sport.

Amongst the officials in attendance was the international race starter, Margaret Werrett, who was one of the starters at the London 2012 Olympics and is off to Tokyo in a few days’ time to officiate at the Paralympics.

The day was a true celebration of grass roots athletics at its best and a real testimony to Kidderminster and Stourport Athletic Club’s ability to host a competition of the highest standard.

Joint organiser Andy Priest said: “With athletes looking to get high quality competition it was fantastic to see nearly one hundred competitors taking part in the 100m and every field event full to capacity”.

The track races were seeded and in the fastest 100m race there was no less than Thomas Young, one of GB’s Paralympic athletes looking for his final warm up competition before flying out to Tokyo to compete in the T38 category. Debbie Lambert commented: “Kidderminster and Stourport AC wish Thomas all the best on his Paralympic adventure”.

To kick off the day the hammer competition saw great performances by three Kidderminster and Stourport AC athletes. Jess Surridge came second and also went on to place second in the javelin. Hannah Telling came fourth and Hayley Smith eighth with a new personal best.

KSAC’s Nicole Bevan won one of the 600m races for under 11’s and the triple jump provided a two-way tussle for the top spot from the Club’s home athletes. James Milburn coming out first with a jump just shy of 13m, with Tom Annis second and his brother Sam a creditable fifth.

Under-13 Club athlete Will Price won his 100m with Alex Payne third in his 800m. Further success in the 100m for KSAC athletes included a first for Ben Voyce and Masie Law, who also had a second place in her 200m; second for Tom Beynon in both his 100m and 200m and third for Libby Oliver in her 100m. A very close final 100m saw Arran Gulliver crossing the line in a blanket four way dip with all four athletes getting the same time of 11.4 seconds. Isabel James ran a very shrewd tactical race to win her 1500m. Ava Freeman won her 200m, with Lucy Gibbons and Theo Lewis claiming third places in their respective 200’s.

At the end of a hectic day, joint organiser Jack Lambert said: “I have been completely overwhelmed with the number of entries and level of support we have received. I’m sure my dad would have been very proud.