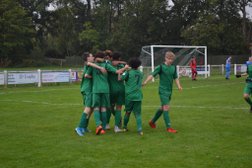 Our Academy take the points at Yarnton Road.....read on

While a 3-1 scoreline for the Greens looks comfortable, this game was anything but that and in all fairness to Yate they could have easily shared the spoils. Kidlington started the stronger of the two teams and it was from a corner on 9 minutes that Steven Soares headed them in front. Kidlington were dominant and only a brilliant save by Fiddes in the Yate goal kept out a Fernando screamer diving away to his left, four minutes later. It was no surprise when Kam King squeezed home at the near post to double his teams advantage on 21 minutes but that was as good as it got. Despite looking at sixes and sevens Yate forced a mix up in the center of the Greens defence as Ali pulled a goal back and shortly after the whole game changed when the powerful Burnett bust through on goal. Keeper Toby Cruickshank cut down the angle and saved bravely at the forwards feet but the resulting injury took five minutes from the game. Within two minutes of the restart the same player was again in the clear this time Cruickshank made an even better save to deny what looked a certain goal. Unfortunately that was to be his last action and he left the field with Tyler Harris taking over in goal.

With coach Declan McGovern reshuffling his team the home side limped to half time (2-1) and Yate now looking the more likely. The second half was really all Yate as they dominated Kidlington streaming forward in waves. Replacement keeper Tyler Harris showed great tenacity as well as no little bravery and one save at the feet of the marauding Burnett saw another lengthy stoppage after he clattered the keeper with the ball in his hand. It should have been a straight Red but the forward escaped penalty and even a sin binning having already seen yellow for an earlier offence.

Kidlington were on the back-foot and only the occasional foray forward offered any rest-bite. With our midfield virtually bypassed captain Joe Langdon in the heart of our defence was a savior time and time again, and as the game moved into the final ten minutes the introduction of fresh legs from the Russell boys up front and BenThomas. brought about a chance. A mistake from the Yate keeper who was penalised for being outside the area while drop kicking the ball gave the home team a free kick right in centre of the goal. It was strangely fitting that up stepped MOM Joe Langdon to smash the kick into the back of the net.

With more than six minutes of time added on, this still left us 13 minutes to play but the young greens saw the game out without further alarm however a 3-1 victory was anything but comfortable.