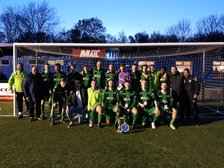 On Saturday night, Kidlington’s development team won the OFA intermediate Cup at Oxford City’s Court Farm Stadium and it was incredible turn out from committee members, first team members and supporters from the village. The crowd was around 500 for the final and many were cheering on the greens. It showed the tremendous togetherness of the club and the village.

Despite having four key players missing due to injury and holidays, the greens overcame the North Berks League Division Two leaders.

After five minutes, young winger Jack Gaul crossed for the evergreen Jimmy Deabill to tap home for the perfect start. Joey Cowlishaw and Gaul had good chances to make it 2-0 but both missed. Then after 15 minutes Steve Outen scored a penalty for Watlington following Jack Johnsons foul from a long throw in. The final was turning sour for the greens as Darren Outen headed Watlington in front after 20 minutes following a mishandled free kick which spilled out of the hands of goalkeeper, Luke Sanders. Kidlington looked nervy throughout the first half and went in with a 2-1 deficit.

The second half though was one way traffic and after an hour big Jimmy Deabill smashed in a shot from Callum Rice’s corner, it hit the underside of the bar and flew into the net. Four minutes later and the greens were back in front, again a great free kick from Rice was glanced goalwards by Jordan Parker and the ball deflected off the Watlington centre half and into the net. Kidlington were back in front. Two minutes later the drama continued as watlington went down to ten men following a trip on the edge of the area. The decision did seem harsh.

After 75 minutes, teenager Piers Walton who had a fantastic second half ran through the Watlington defence and slid home a fourth. This sparked massive celebrations as the cup seemed to be coming back to Yarnton Road. In Nick Laceys absence, skipper for the day, Jordan Parker stamped his mark on the final with a memorable 30 yard shot which arrowed into the top corner on 80 minutes. Parker was not finished though and headed in from Charlie Cassetari’s free kick after 85 minutes.

The final whistle sparked great celebrations from all that had made the trip. It was an overwhelming turnout from the supporters and members of the club. This was the first time the cup had gone back to Yarnton Road in 34 years.