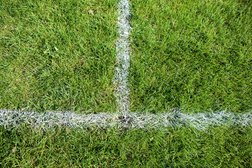 With both open age teams having a full compliment of players and more to select from King Cross Park A travelled with confidence to Wyke A and played that way in the opening quarter. Second rowers Owain Griffiths and man of the match Izaac Beaumont drove in hard then stand off Ben Robertshaw continued his fine form with a great pass for fishmonger centre Will Sutcliffe to finish out wide. Both teams got bogged down in the quagmire of a pitch and finished the half at 4 apiece.

Weighing in at probably a stone a man heavier the Wyke team knew how to play their pitch and conditions to take a two score lead. The Park youngsters continued to toil through the mud and Robertshaw once again orchestrated a gap for loose forward Matt Brown to squeeze over. It was not a day for goalkicking.