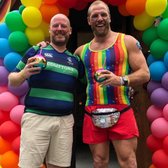 The RFU march with KXS

Former England rugby star James Haskell joined the Kings Cross Steelers, the world's first gay and inclusive rugby club, as they took part in the Pride in London march. It was the first time the RFU has joined in the London Pride celebrations.

Other England rugby players, including women's player Sue Day, and Steelers players walked through the streets of London to show their support to the community.

Matt Webb, chairman of Kings Cross Steelers RFC, said: "This year marked 50 years of the Stonewall riots which was a pivotal moment in LGBT+ history.

"As the first ever gay and inclusive rugby club, established over 20 years ago, we've seen vast improvements in the reception we get from other teams.

"However our players still face homophobic behaviour and language both on and off the pitch which is a stark reminder why clubs like ours still exist.

"We are overjoyed with the presence of role models and allies such as Sue Day and James Haskell joining us on the march."