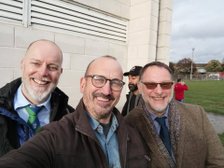 As the Steelers reach a quarter century it is right we recognise some of those who have contributed over the years.

As the Steelers reach a quarter century it is right we recognise some of those pioneers who were there when the club began, as well as some who have contributed over the years.

Nicolas Revel was at our first training session, played in the first games and was formative in some of IGR’s early steps including the creation of the Union Cup in Montpelier. He is an active member of our Mammoths Vets Squad having played in Dublin 2018 and our recent Touch25 tournament, sharing his experience and stories with the newer members of our club.

Nic has been awarded an Honorary Life Membership.

Julien Kiely has been the longest serving and cheeriest prop we’ve had, joining in the early seasons and playing up until recently. He was part of the White Stiletto Cup win, the clubs first victory against our friends at Braintree Rugby Club and many many Bingham and Union cups. He has supported all teams with a chuckle and determination for almost 25 years.

Jules has been awarded an Honorary Life Membership.

Jay Worthy joined in 2007, played at the Dublin Bingham Cup in 2008 and became merchandise manager. His contribution however as Director, Choreographer, Set design & builder and general organiser of our Heaven Fundraisers is why we are honouring him now. The annual show is the clubs, if not the worlds, largest rugby club fundraiser and brings together the "talents" of our members with players & supporters they may not normally spend time with. We look forward to Season 8 of the series as soon as we can get to rehearsing.

Jay is awarded a Vice Presidency of the club

In October 1995 Allan Tavener walked into the Boyz/Millivers office on Holloway Road and asked them to run an advert stating that a Gay Rugby club was starting in November and would be meeting on the 1st November for the first time at Central Station. After the initial gays can't play rugby comments and the laughter the reporter agreed to place the ad.
A group of people met that first evening and started to flesh out the bare bones of what was really a brave pipe dream. The Kings Cross Steelers were born and training commenced the following Sunday morning in Finsbury Park.

Allan is awarded honorary membership for this season and next.

Eammon Ashton Atkinson joined the Steelers on moving to London and not only found his tribe but his future husband John in the club. Having made a great impact on the pitch he used his media skills to help promote the club and our events. When injured before the 2018 Bingham Cup, Eammon took the opportunity to film us on tour and this footage is now an award winning, global film - Steelers The Movie.

Eammon is awarded honorary membership for this season and next for his promotion of our mission globally.
Share via
FacebookTwitter
https://www.pitchero.com/clubs
Recent news