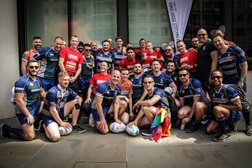 The Kings Cross Steelers, the world’s first gay and inclusive rugby club welcomes the action taken by Saracens and the RFU.

As a club who have been a pioneer for LGBT+ inclusivity in rugby we see these actions of both Billy Vunipola and Israel Folau as completely unacceptable. As a sport we’ve come a long way in tackling homophobia but the actions of a few have now potentially set us back.

We were saddened and disappointed to see the post yesterday by Billy Vunipola in support of Israel Folau, promoting opinions that are both hurtful to the LGBTQ+ community and harmful to young people to whom they are a role model.

We were founded 24 years ago in an environment where gay and bisexual men had been excluded or had self excluded because of the culture and actions of players. Comments like Vunipola’s and Folau’s paint a picture of a rugby community different to the one we know and love and it has no place in our sport.

“We are encouraged by the speed at which both Saracens and the RFU have acted. We were founded 24 years ago and now sit as one of 76 clubs within the International Gay Rugby (IGR) body representing gay and inclusive clubs. We believe in fairness and respect so await the outcome of those procedures in due course. We are also thankful for the support we have seen from players such as Joe Marler, James Haskell, Max Lahiff and others.”

“We applaud the decisive steps taken by the Austrailian Rugby Union and expect our body to be bold when faced with similar scenarios.”

“We play and live by the five core values of the RFU and ask all those who love the sport as we do to do the same. It is important that a zero-tollarance approach is taken as homophobia and discrimination in any form have no place in our sport or society.”