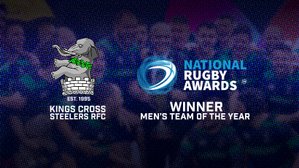 We're all absolutely thrilled to have won Men's Team of the Year at the National Rugby Awards 2019 held at Twickenham Stadium.

The judging panel praised everything the club has done over the last 24 years to combat homophobia, transphobia and hate speech in rugby and sport generally. The awards team were impressed by our 1st XV winning their league unbeaten in 2017/18 and a hugely successful season in 2018/19.

The 2019/2020 Pathway begins in mid September and there's still time to sign up.