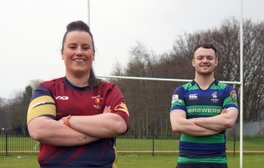 Two award-winning rugby clubs have shown their commitment towards inclusive rugby for all by teaming up to offer a pathway for more women into the sport.

Nationally acclaimed Kings Cross Steelers RFC and East London RFC, through its women’s team the Vixens, have entered into a partnership that will see them support one another through joint recruitment and Try Rugby events to introduce the game to those who have not played before.

According to global governing body World Rugby, women's rugby is growing as fast, if not faster, as men's rugby. It is played in more than 80 countries worldwide and it is estimated that by 2026, 40 per cent of the total number of rugby players will be female.

In England participation continues to rise, but the women’s game at both grassroots and elite levels globally is held back from achieving parity with the men’s game. Lack of funding has had an impact, including the Women’s Six Nations tournament, which kicks-off on April 3, being reduced in scope, the postponement of Rugby World Cup 2021, and Premiership Rugby in need of support.

The Vixens formed in 2011 and have enjoyed three league wins and two promotions. Past and present members have played at County Championship, Premiership and international level rugby. The Steelers have long been supporters of East London RFC and the Vixens and have a great relationship with them through a long established grounds and clubhouse sharing arrangement at Memorial Park in West Ham.

The new partnership will see the Steelers hugely successful Pathway to Rugby programme being opened to all genders for the first time in August 2021, with recruitment starting in May. Joint promotional activities will take place through the websites and social media channels of both clubs. Each club will support issues concerning the women’s game. This will include the #ICare movement that began when, following the announcement of the delay of the Women’s Six Nations tournament, a number of people commented online that “nobody cares”. In response, #ICare began as a call for fans of women’s rugby and players to show their support for the sport.

The partnership also includes a standing invitation for the Vixens to join the Steelers at International Gay Rugby tournaments and events to help support the growth of women’s rugby across the globe.

Steelers Chair Matt Webb said: “As a vibrant and growing club with Gay, Bi, Trans, Non-binary and Straight members we could not claim to be totally inclusive one until we equally threw our support behind the women’s game. This partnership is a natural progression from the friendship we have with the Vixens and East London RFC through more than 20 years of sharing a clubhouse. The Vixens are a fantastic, award-winning squad who champion inclusion and have stood out in their support for women and trans women’s participation.

The Steelers now offer a route into rugby for all genders and will do all we can to be allies to the Vixens and the women’s game, and as a club we all say in union #ICare.”

Vixens’ player Kat Salthouse, women’s representative on East London RFC’s management committee, said: “By joining together, the Vixens and the Steelers can introduce more people to a rugby family that welcomes everyone. The Vixens are a great mix of people. We have all shapes and sizes in our ranks and all levels of ability. We are proud of our multi-national and culturally diverse mix of players, as well as the range of skills and talent we demonstrate off the pitch. Whether you are a mum, a firefighter, a teacher, a city worker, a therapist, an ambulance worker, a scientist, a student, or a veterinary nurse, everyone can play rugby. There is also a great social side to our game.”

East London RFC Chair Simon Crick said: “This is an historic partnership for both clubs. It builds on the friendship we already have while fully respecting the Vixens’ position as part of East London RFC. Players who join the Vixens or the Steelers do so because it provides them with a community to play the sport. This agreement will allow more players to realise that who they are shouldn’t stop their ability to play and enjoy rugby.”