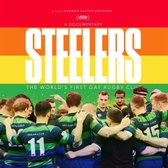 Steelers, a documentary by Eammon Ashton-Atkinson is to get its UK premiere at the Glasgow Film Festival this month

In 2018 6 squads and their supporters, totaling almost 200 members, travelled to Amsterdam for the Bingham Cup. Ruled out from playing through a concussion, Eammon took the chance to use his work skills, as a journalist and camera man, to record footage of the tournament and interview members of the club instead. Whilst he was missed on the pitch, the club was to gain a record of the highs and lows we were all to experience, captured on film.

Fast forward 2 years and that footage became a documentary featuring our clubs progression through the tournament and the deeply personal stories of some of our members. It was shortlisted for the BFI Flare Festival and then COVID struck and all celebrations were called off.

Now, having toured the globe, we are delighted that this emotional rollercoaster of a film will get a UK audience. Screening online as part of the Glasgow Film Festival and having seen huge support from England Rugby you can get tickets for screenings between the 26th February and 1st March.

Recently reviewed in the Guardian and the Sunday Times, where it was described as "essential viewing for all", you can watch the trailer and get your tickets by clicking HERE