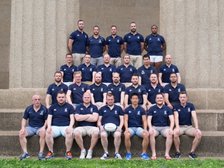 Play got underway with a series of strong drives form the East London pack. Leveraging their size advantage and the conditions to apply pressure to the KXS try line and scrum in the first 20 minutes. Steelers absorbed the pressure and worked their way back up the pitch with a strong break by their hooker Ross Griffiths. Outside centre Peter Szewcyk-Gould made his way under the posts for the first try a few phases later. The conversion making the score 7-0 where it stayed until the second half.

Two quick unconverted tries in the first ten minutes of the second half from Ben Coney Critchley’s fly-half breaks pushed the Steelers lead to 17-0. East London hit back with an unconverted try at the 55 minute mark. The score staying 17-5 until the last 15 minutes when the Steelers sustained pressure was rewarded with late tries to Jack Hughes and Tom Gorton-Clark. The final score was 31-5.

A great game considering the conditions. We always enjoy the spirit of our rivalry with East London. It is especially pleasing given the downpour to see 5 tries to our backs, built on the hard work of our pack."