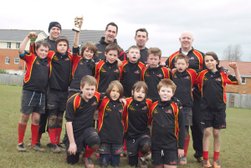 Boys beat the hosts to storm to victory

The U10s charged to victory at the Redditch tournament this weekend after winning their age group in a tournament staged by Redditch RFC on Sunday.
The boys faced off against opposition from Old Edwardians, Woodrush, Old Yardleans and the hosts Redditch to secure a place in the final.
And they claimed victory with a 5-1 win with some great team play and hard work- and a cracking try from Drew Mitchell to open with!
The tournament also saw newcomer Jack Thomms score his first try for the Rhinos! Well done Jack.

The Rhinos U8s also claimed victory in their age group.