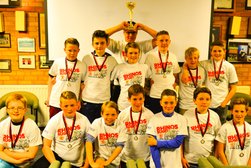 Congratulations to the U12s on another storming season

Well done to the whole team for a fabulous year of great rugby and team spirit.
Roll on next season!