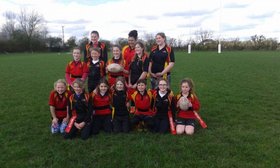 Kings Norton Rhinos were drawn in the group stages with Shipston A, Old Laurentians B and a Berkswell and Balsall B. It was considered by Rhinos team coaches Shipston A was the team to beat in the Tournament. So tactics were discussed involving parents and players and it was agreed to field what Rhinos coaches considered to be was our strongest team on the day to win that game. Our first match was against Shipston and our girls did us proud and won by 8 to 7 and we were then in with a chance of winning our group, this was really good as we have an history of loosing first matches. We then mixed our squad in the other two games winning both matches, 6 to 4 against Old Laurentians B and 9 to 4 against Berkswell and Balsall B.

This was history for us it was the first time Rhinos Girls had got to the semi final stages of a Tournament and we were drawn against Bromyard. Unfortunately we lost Millie and Rosie who had to leave early due to other commitments. This was a big loss as these are two of our eldest and strongest players, but this did not phase the girls left in the squad. This was a hard game with Evie being laid flat accidentally by one of the opposition and Iza having her belt stripped but neither infringement being awarded with a turnover ball as agreed at the coaches meeting at Kings Norton RFC at the start of the season. The game ended with Bromyard running out winners 4 to 6 and an unhappy squad of Rhinos girls.

Bromyard went on to win the Tournament beating Kenilworth but the Rhinos bounced back determined to get third place. Rhinos play-off for third place against Yardley and District RFC was also marred with contoversey from the start about who was going to referee the match. When a referee was selected a controversial decision by the referee resulted in the Yardley manager and Kings Norton manager shaking hands and agreeing a final draw at 4 to 4 and sharing the points for a joint third position.

Rhino Girls of the Tournament for Kings Norton and receiving the cuddly Rhino for the week was Iza and Jamie won the Rhinos mask as she looked so sad we felt it best she had something to hide behind. Well done girls looking forward to a good season.