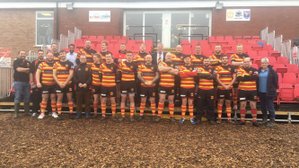 They say that the British Empire was built on British naval power. Well, the performance by the Kings Men on Saturday was built on Kings Norton forward power. And good team spirit. Superior fitness had something to do with it too. Plus a strong bench is always useful. Good job the result didn’t hinge on goal kicking though. After an October defeat away at Keresley, the lads were itching (with some of the younger lads itching more than most) to reverse that early season loss.

The supporters flocked to Ash Lane-on-Sea in anticipation of a fine example of underwater rugby, and they weren’t to be disappointed. Straight from the kick-off, the men in red, black and gold sought to assert their dominance, with captain Richard Revell leading from the front, and where Revell led, others followed. Scrum half Shane Rees was like a two armed Admiral Nelson, expertly marshalling his water-borne forces to send them, ball in hand, sloshing into the opposition ranks. Keresley were all at sea as they found themselves scrambling back to defend their try line. After the hard work from the forwards, the backs were set free. Two phases later, fly half Adam Beech turned the rudder hard to port and found flanker Dan Thomas out on the wing, who danced round the final defender for Kings’ opening try. The conversion went anywhere but between the posts, but that mattered not - Kings were off to a sparkling start.

The recipe for dominance was clear, so the hosts continued with this forward orientated game. Sure enough, it paid dividends with further tries from Kris Fenn and Shane Rees. 15-0 up with only 20 on the clock was an amazing start, but it was also the catalyst for Keresley to find their sea legs. With their first bit of quality ball, the visitors were able to play their own game plan, with their bigger boys driving around the fringes, before letting the backs do their thing. They made gains, but there was no panic in the Kings ranks. If anything, there was a sense of assurance about the home side’s defence; they absorbed the blows, knowing that they would be able to contain the threat and take the wind out of Keresley’s sails. Sure enough, the ball was spilled overboard following passionate tackling, allowing Kings to clear their lines.

The visitors then changed tack, seeking to gain ground through use of the boot, but to limited effect. The back three in red, black and gold were always able to field the ball with aplomb, sending the ball back, be it by boot or by hand, with interest. Following good counter-attacking from Mike Smaylen and Karl Ford, Kings again found themselves in a scoring position, with the points this time coming from an unidentifiable figure who emerged from the muddy gloom, ball in one arm and the other arm held aloft in celebration. The keen boot of Shane Rees made no mistake with the conversation to give Kings a 22-0 lead on the stroke of half-time.

The half-time break allowed Keresley to steady their ship, but still they struggled to impose themselves on the game. After their early promise, it was the hosts who went through the gears. From first phase scrum ball inside centre Will McGinn made the crucial break that weaved this way and that, causing as much havoc amongst his own supporting team mates as it did the opposition defence. As the Keresley ranks closed in on him, his pass found its way into the arms of starboard winger Karl Ford who in a completely necessary, selfless and non-showboating way, dived for the corner. Try Kings! The only Kings player not celebrating at this point was kicker Rees. Would it be too much to ask that someone, anyone, scores anywhere vaguely near the posts???

The try finally stung the visitors into action, and perhaps Kings too were guilty of complacency. Keresley worked the phases well to get themselves deep into Kings territory, from which a series of offloads finally gave them the try the that their efforts deserved. 27-5.

Come the final quarter, the conditions were getting the better of both sides. Territorially, Kings were on top, but could not maintain the continuity needed to convert that into points. For their part, Keresley attempted to use the boot to relieve the pressure, but the respite was only temporary as Kings took the game straight back to them each time. Despite the mud-lock, Kings knew the win was in the bag by this stage - a bonus point win at that - so were content to let the clock wind down. But when that final whistle went, my word the celebrations began. The muddy men who had started the afternoon in red, black and gold, but finished it caked in the brown stuff, celebrated their win, saluted their opponents, and then went to wash the mud out of their ear holes.

There was more of the brown stuff to come for Kings, but this time it was lovely nutty brown winners’ beer. Post match rehydration came courtesy of Black Sheep’s Best Bitter; the brewery’s website is not lying when it describes this 3.8% ABV treat as “as a light, clean drinking and moreish pint”. Whilst this particular ale-o-phile has a mild preference for their Golden Sheep ale (a more punchy 4.7% ABV that is perhaps a little too hefty to make it a true session ale, as thoroughly enticing as it is), the Black Sheep was nevertheless a treat for the tastebuds that was enjoyed late into the evening.

A break from league action next week as Kings Norton go into the pool (the fixture pool, not the swimming pool). Opposition and venue TBC.