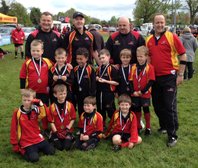 Rhinos enjoyed a great festival day, with true 'team' performances from both sides.

This was our penultimate festival of the season, with a main emphasis on fun and enjoyment.

We sent out two mixed-abilities teams and were delighted by the performances of each and every player. There was great encouragement of one another and a real sense of the camaraderie we have been looking for this season.

The two teams were drawn in separate tournaments, each playing 3 'pool' fixtures on a league table basis with winners and runners-up heading to semi-finals and finals.

Rhinos Blacks, consisting of Charlie J, Iwan, Noah, Lewis and Rueben, got off to a flyer with a solid performance which saw all players scoring tries, such was the strength of their support play and passing, running out 9-6 winners against 'Stratford II'. Next up was 'Breedon Star I', in a very tightly fought match all was level at half-time and Rhinos showed great character to edge their rivals out 6-5.

The final group match was a credit to both sides who never gave up, played some terrific rugby and scored some wonderful tries. Rhinos held their own against the much-fancied 'Barkers Butts II' the final score 7-7.

Rhinos Blacks finished runners-up in this group on the same points as Barkers Butts II, but with BB scoring 23 tries overall to Rhinos 22.

In the Semi-final Rhinos Blacks faced 'Barkers Butts I', and after a slow start which saw them 4-1 down at half time, show marvellous determination, teamwork and spirit to score a further 3 tries (drawing the second half 3-3) though going down 4-7 in the end, a sterling effort against the team that went on to win Tournament I.

Rhinos Reds team of, Ethan, Charlie H, Nat, Joel, Thomas and Mansell, had an equally successful tournament with every player contributing to their free-scoring style. The first game was a fantastic start beating 'Breedon Star II' 11- 6. Next up were the much-fancied 'Claverdon I' (winners of own tournament earlier in the season). The Rhinos Reds showed their improvement in all areas, great team spirit and some wonderful running rugby to come out 9-8 winners.

The high-scoring continued into the final group match in a thrilling, closely-fought fixture against 'Stratford III' The home side gave their all but in the end could not match the free-scoring Rhinos Reds, the game ending 8-7.

Rhinos Red won their league and went into the semi-final against 'Breedon Star III'. Again the teamwork and togetherness was clear in the Rhinos play, with no lack of passion and commitment. The skill levels were at there highest and we witnessed some wonderful running, tagging and try-scoring. With the score 8-8 and entering the final play, Breedon somehow made it over the line to get the winning try. Again Rhinos team only going out to the eventual winners of Tournament II.

Well done to all the Rhinos, we are proud to have a very strong squad of committed talented players, who together are becoming a formidable team.