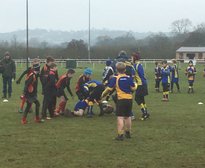 Much improved defensive performance from Rhinos

Rhinos tackled, challenged and competed as a team today, in a much improved performance from the reverse fixture just a few weeks ago.

Against arguably the strongest opposition we have played this season, the boys put in not only a spirited performance, but also a disciplined one - which was particularly pleasing to see the results of recent training sessions. They held their 'line' much better as a team and held their individual positions better, which allowed them to defend in numbers across the width the pitch.

Presenting at the ruck was much improved and as a consequence this made space for rucking over, which in itself was better today.

There is much work to do, but under this very stern test, and with 6 players missing, the boys showed great spirit and character and should all be congratulated for there efforts today.