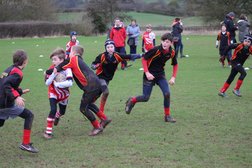 A great advert for Mini's Rugby

Rhinos showed continued improvement in all areas of their game, and despite going down to an early try, rallied to win a very close first game.

Although the boys fell behind, again to early tries, in the second game; they showed great spirit and determination to come back into the match and make it a thoroughly entertaining contest. Claverdon though, held on to their lead, for the fixture to end with one win apiece.