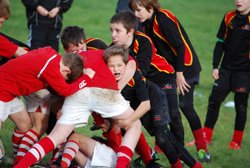 Injury stopped play as the Rhinos travelled to Claverdon

On an unusually beautiful December day, the U11s faced off against Claverdon.
The opening game started very much in the Rhinos' favour, with Toby Hill kicking off the score sheet with a try straight from a scrum, followed by another as he stole the ball from the opposition on the try line and simply put the ball down!
Passing, driving forward and great defensive play led to another try straight from the scrum, this time from Matthew Moseley.
Claverdon pulled one back, but then Toby Mansell left the score 4-1 to the Rhinos in the first half after driving through the Claverdon defence like a bulldozer to get the ball over the try line!

Unfortunately a crunching tackle at the start of the second half, left a Claverdon player badly injured and unable to be moved off the pitch for at least half an hour.
The game was halted until medics could remove and care for him.
The half was consequently abandoned.

In the second game Claverdon upped their game, putting in many more tackles. The first half of the game finished 2-1 to the Rhinos - reflecting Claverdon's greater commitment.
Both Rhinos tries were from Toby Hill, but with some great work from the rest of the team to get it out to the wing.
In the second half the Rhinos stepped up their gear and rampaged through their opponent's defences and with some wonderful passing down the line managed to score 4 more tries.
A great run from Dan Washington who caught the ball from kick off and made it down to the Claverdon line, led to a Toby Mansell try; a lovely steal from Drew Mitchell also got his name on the scoreboard and there were two further tries from Matthew Moseley.
Final score: 6-1 to the Rhinos

NOTE: A call from the Claverdon coach confirmed that their injured player was OK after being checked out. Just soft tissue injury.
A big applause to both teams for remaining patient and respectful while he was being treated.

Photos from the game are from Tara Washington and Matt Hill.