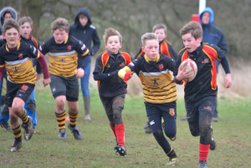 A cracking game of rugby between two closely matched teams

Easily one of the best rugby games of the season, the boys faced Droitwich on a freezing cold, windswept morning!
Both teams fought long and hard for every ball and both teams showed serious grit and determination as they dug deep for two matches.

The first game saw the Rhinos dominate the first half, playing well into the Droitwich half tantalisingly close to the try line.
But they just couldn't break through the Droitwich defence and the scoresheet remained clear.
The second half was another game of defence as both teams kept each other off the try line, but finally Droitwich broke through with a flying pass to add the first try to the game.
The first game finished 1-0 to Droitwich.

The second game continued in the same vein, with tackles in early from both teams, lots of fabulous defending and little chance to break through.
But in the dying seconds of the second half, Matthew Moseley took a quick penalty and flew the length of the pitch to score for the Rhinos.
Second game finished 1-0 to the Rhinos.

A great game of rugby from both teams, who showed that if you keep going the rewards are there!