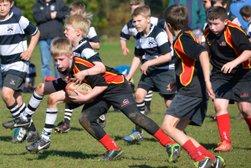 The weather smiled the first time this year on a glorious day for rugby at Stratford.
The U11s played in a triangular match against the hosts and a visiting Worcester, so it was a tough draw.

The first game was against Worcester - a side we faced in November at home in a crunching game which saw Worcester the victors.
Maybe it was the sunshine or maybe it was the training or maybe it was a bit of that Rhinos grit and determination, but this match was a completely different matter!
The Rhinos commanded much of the play and constantly challenged the Worcester try line, giving their opponents little opportunity to really threaten a serious attack.
However, once again it was a thrilling game of rugby with both sides digging deep and hungry for the ball.
Great teamwork let to two tries from the Rhinos - one from Matt Moseley and one from Toby Hill, leaving the final score 2-0 to the Rhinos

The second game saw them play the hosts.
This time the Rhinos really read their opposition and played to their strengths, passing out to Toby Hill on the wing to give him the chance to stretch his legs!
Five tries to Toby, followed by one from Matt Mosley and one from Dan Washington.
But all credit to the whole team who worked together to break down the Stratford defences and get that ball out where it mattered.

It was a tough call which was the more thrilling - the Rhinos' match or the England V Wales match which followed!