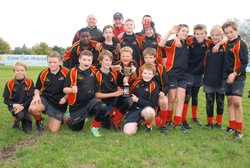 Rhinos U12s start the season on a high

The boys kicked off their season with a stunning win at Walsall U12s Tournament against a difficult pool of teams.

In glorious autumnal sunshine, the boys first faced up to Worcester in a very close and hard-fought game.
The Rhinos played some great defensive rugby which saw the whole game go without a single try from either side.
SCORE: 0-0

Next up they played Bromsgrove and turned their defensive play into great team attacking to break through the Bromsgrove line. Great passing and running the line lead to a comfortable win.
SCORE: 4-0 to the Rhinos
Tries from: Jack, Dan and two from Matt

Their next opponents Bridgenorth played hard and fast, but the Rhinos kept their cool, and really played as a team. Hard work from the backs meant the ball could be passed out, leading to another victory.
SCORE: 5-0 to the Rhinos
Tries from: Dan, Matt, Lucas and two from Jack

The final game in the pool was against Wolverhampton, who proved very tough opponents.
The game was very tight and in the first half no one team dominated.
But in the second half the Rhinos notched up a gear and hard work gained them two tries.
SCORE: 2-0 to the Rhinos
Tries: Matt x 2

The boys tied for first place in the Pool with Worcester, but their impressive point score and not having conceded a single try boosted them to the top of the table and a place in the final.

After a long wait they faced Tamworth in the tournament final.
A really tough and exciting game; every ball was hard fought on both sides, everyone working their socks off, heads down, determined to win.
The first half saw a try from Matt, followed by an equaliser from Tamworth. The match could easily have gone either way.
But again, the Rhinos found reserves of spirit and stepped up that gear again to score another two match winning tries.
Excellent team play from the whole squad - everyone doing their bit to secure the win.
SCORE: 3-1 to the Rhinos