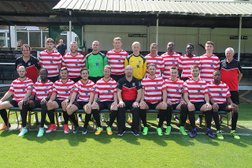 Harlow Take A Chance and Take A Win

Harlow Town win their first away game of the season with a Jared Small goal midway through the second half.

The time has come. The reviews are in and Rotten Tomatoes have totted them up.

So what does the second part of the exciting new Kingstonian trilogy - ‘Three home defeats in a week: Harlow Town’ – score?

‘By no means a complete disaster but let down by a suspect script and an all-too-predictable ending, Harlow Town, just like its predecessor Enfield Town, leaves you wanting more.’

Much more, in truth. A goal. Something falling in our damn favour. A clean sheet. A positive impact from a sub. A happy ending.
K’s started brightly and Ryan Moss, looking suspiciously offside, should have done better with an early shot that our old chum David Hughes parried into a danger area. Youssef Bamba was too slow to the rebound.

Pico then headed against the underside of the bar. The ball bounced down but not in according to the scene-stealing assistant referee, whose first-half cameo must put him in contention for a Best Supporting Oscar in February - ‘Keep singing for me’ was perhaps the pick of his witty one-liners.

Harlow also hit the post in the first half and a Rob Tolfrey wonder save denied Jared Small a headed goal after a free-kick wasn’t cleared.

Moss, Joe Turner and Gomez then had efforts saved before the halfway stage. Despite some promising action sequences, there had been no coup de grace.

Things got more disjointed in the second act. Moss really should have put his name in lights but headed wide, and then Small did have a decisive impact, turning in a low cross after George Wells forgot his lines.

On Kingstonian laboured, plugging away but finding on-stage rhythm elusive. The audience’s patience was running out, and so director Tommy Williams thrust some new characters into the fray – to no avail.

There was no final-frame twist, no unexpected finish, just a feeling of emptiness as the watching hordes trundled home. Probably should have been straight-to-Blue-Ray, this one, yet rumours of a third stanza – ‘Three home defeats in a week: Worthing’ - persist.