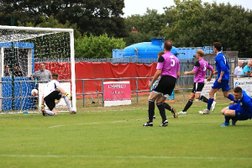 The Royals hosted Brightlingsea Regent FC in the Ex preliminary round of the FA Cup.

The Royals hosted Brightlingsea Regent FC in the Ex preliminary round of the FA Cup. Jamie Godbold made several changes to the team that started Tuesday night against Norwich United. Robert Horton was unavaliable for Saturdays game so Gary Williams took his place in the middle of the field. Baker moved back into the left wing with Nathan Russell getting a place in the starting line up along side captain Ross King.

The Royals got off to an edgy start against the newly promoted Regent as they were pressing and forcing the defence to panic and make slight mistakes. Regent opened the scoring within 3 minutes when a corner was whipped in & fumbled by Rogers, and Hughes was there to slot the ball home from 6 yards out.

Tarren Grint played well in the first half, running down the left wing and putting their defence under pressure. Nathan Russell was causing trouble down the right wing with his pace and skill to get around the defenders. Baker whipped a ball over to Russell with a shot from a tight angle but it was saved by the goalkeeper and no one was there to slot it home.

Kirkley saw shot after shot go just past the goal posts which inevitably became frustrating for players, managers and crowd around the ground. The Royals went into the break trailing.

The rain accompanied the game play as the second half begun but that didn't phase The Royals with Russell doing a lot of running towards the box, passing to Baker with shots saved. Kyle Baker set up Ross King superbly for him to strike and get The Royals level just 10 minutes after the break.

Kirkley piled on the pressure throughout the second half. Matt Brown caused the goalkeeper to make a few mistakes as he closed down with his immense pace. Jamie Godbold came on in the second half to replace Gary Williams who made a quick impact. Jamie intercepted and passed the ball out to Nathan who's shot is straight towards the goalkeeper. Minutes later he made an impact once again with a shot from range, but was palmed away by the goalkeeper. Brightlingsea Regent catch The Royals with their guard down and breakaway down the middle. Griggs the man with the shot blasted across goal into the bottom corner. 83 minutes and the game seemed over for The Royals and their FA Cup ambitions for this year. Kyle Baker went down in the final minutes with an ankle injury so Tacon came on in his place to see out the game.

90+4 minutes and it looked all over but Nathan Russell made a run towards the goal, the ball was laid off and Nathan slotted into the back of the net to secure a replay and keep their FA Cup hopes alive!

The replay will be played at Brightlingsea Regent on Tuesday night so the home match against Thetford Town will be postponed until later in the season. The Royals are also away on the 24th August to Hadleigh United so their next home match will be 31st August against CRC. 3pm kick off.