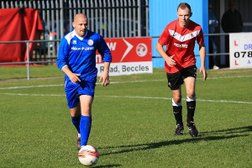 The Royals progress into the 1/4 finals of this years Suffolk Premier Cup with a 6-2 win over Newmarket Town.

Newmarket started the game brightly but it was the young Royals that broke the deadlock on 31 minutes after Ricci Butler slid the ball home after being sent clear by Kieran Baldwin’s clever pass. It was 2-0 on 35 minutes when Gary Williams unleashed a left foot rocket which found itself hitting the top corner of the net and leaving Newmarket ‘keeper helpless.

Controversy surrounded Kirkley & Pakefield’s third goal on 44minutes. Newmarket were awarded a free kick just wide of their penalty area. The defender passed back to their goalkeeper, which the referee had classed as the free kick being taken. Ricci Butlers predatory instincts dispossessed Anderson before rolling the ball into an empty net, leaving the Newmarket players stunned and Kirkley walking in at half time with a 3-0 lead.

An error from Anderson allowed Newmarket to pull a goal back after 58minutes to make it 3-1 to signal a Newmarket fightback. However, this was short lived 2 minutes later when Nathan Russell, whose direct running had caused problems for the Newmarket rearguard all evening, waltzed his way into the box before shooting across goal, only for his shot to be parried into the path of Butler to score the rebound to complete his hatrick on the hour.

Butler scored his 4th goal of the evening, and Kirkleys 5th following good pressure from Godbold and Baldwin. With the latter finding Butler some 20 yards out, his first time shot flashed past keeper Anderson and into the far top corner of the net to make it 5-1.

Newmarket pulled another goal back on the 84th minute when Tulbourne took a shot from outside the area to beat Anderson. It took just one minute for the Royals to get their 4 goal lead back. Ross King was at the end of a pass from substitute Holmes to drive the ball home to complete the scoring and continue Kirkley’s impressive winning streak.

Kirkley and Pakefield are looking to continue their winning ways at home against Walsham – Le – Willows this Saturday (12/10/13).