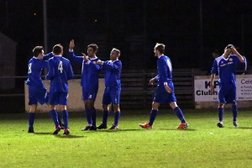 The Royals Lose 3-1 to Felixstowe & Walton to bow out of the Red Insure League Cup.

When Captain Ross King volleyed Kirkley & Pakefield into the lead in the 77th-minute of this Red Insure ECL Cup match at Walmer Road last night, there looked to be no way back for ‘The Seasiders’ of Felixstowe who had not recorded a single shot on target up to that point.

However, that was all about to change – and in some style.

Substitute Lewis Pemberton struck a post in the 85th-minute for the visitors with his first touch moments after coming off the bench and just sixty seconds later, Rhys Barber had Felixstowe level when he slotted home the equaliser from close range following a corner.

Danny Crump in the visitors goal had been much the busier of the two ‘keepers throughout the game and on 87 minutes he saved a shot from Ricci Butler and delivered a long wind-assisted clearance which was volleyed into the home net by Alfie Matthews.

And the turnaround was as emphatic as it was unexpected, with Danny Thrower completing the flattering score line with a low shot under Hayden Rogers deep into time added-on time, enabling Felixstowe to progress to the semi-final draw and record their fourth win of the season over Kirkley & Pakefield.

The home side had won the toss and elected to play with the strong wind at their backs in the first-half. But it was their goal that came under threat initially when Ryan Clark cut into the area and unleashed a shot that was close to being turned into his own net by Tarren Grint before the danger was cleared. Kirkley had the opening corner of the game but it was well claimed by Crump. Tarawali then shot wide as the Felixstowe goal came under increasing pressure.

Influential midfielder, Player-Manager Jamie Godbold, saw plenty of the ball with Kyle Baker and Ricci Butler a constant threat upfront. Indeed, Felixstowe ‘keeper Crump had to be quickly off his line to deny Butler at the expense of another corner just before the half-hour mark. Shortly after, the visitors appeals for a penalty were turned down when Powell was challenged following a decisive run forward into the home area. But it was ‘The Royals’ that continued to pose the greater threat with Crump saving shots on target from Butler and Brooks as the first forty-five minutes drew to a close with Kirkley on top.

Felixstowe’s Ryan Clark and Jordy Matthews had taken knocks before the break and were replaced by Ryan Birchfield and Alfie Matthews as the second period got underway. And with a following wind now in their favour, ‘The Seasiders’ had the first attack of the half – Thrower and Cranfield combining to set up Josh Hewitt who fired just over the home cross bar. Both sides were attacking in numbers now with first Crump saving from Baker and then at the other end, Rogers called into action to fist away Barber’s free kick from wide on the right at the expense of a corner, on 60 minutes.

Butler then went close when well placed for Kirkley and Grint shot over from distance. The deadlock was finally broken 13 minutes from time. Powell was flattened as a Kirkley corner came into the Felixstowe area and with the player on the ground and many expecting the whistle to blow, Ross King volleyed the ball into the net. The circumstances may have been unfortunate for Felixstowe but the lead was no more than the home side deserved at that point – and they looked certainties to go on and win the game.

But now came the most dramatic turn of fortunes.

Pemberton replaced Powell and with his first touch, in the 85th-minute, he placed the ball past the diving Rogers and onto a post. This seemed to galvanised ‘The Seasiders’ into action with Cranfield forcing a corner off Brooks only a minute later and as Thrower pumped the ball in, Rhys Barber bundled it home from close range in a crowded box.

A minute later and Felixstowe had turned the match on its head when, after saving from Butler, ‘Seasiders’ ‘keeper Crump cleared up-field and his wind-assisted punt was carried into the Kirkley penalty area where the chasing Alfie Matthews was on hand to volley in.

And the reversal was complete two minutes into time added-on when Thrower drilled a low shot under Rogers to seal it for Felixstowe. The final action of the game saw Rogers produce a spectacular save to deny Cranfield, completing a hectic last ten minutes which had transformed the scoreline.