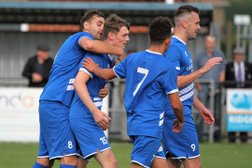 Away Loss for Royals ahead of Home Cup Quarter Final

After the previous Saturday’s hotly contested match at Walmer Road with three sending’s off Kirkley & Pakefield FC travelled to Whitton United for a quick back to back return league fixture. The ‘Royals’ were without suspended captain Jack Herbert and Max Wall on holiday so Jack Hutchinson and Matty Brown both came into the starting line-up. The match commenced in very strong unpleasant winds with the home team having the first chance with a Jamie Cole header on 5minutes comfortably collected by keeper Rix, on 10minutes following a free-kick Stefano Mallardo headed in just below the bar to put Whitton 1-0 up. On 19minutes Cameron Russell headed well into to net but was ruled offside, on 23 minutes Rix stopped a shot from Cole from point blank range, he then gathered another dangerous cross but two minutes later was powerless to keep out another shot by Josh Hubert from just 6 yards out attempting to save with his legs but unluckily the ball soared into the net for the home team’s second. On 28 minutes saw more action this time from the ‘Royals’ when Gerson Soares recovered well to hit a fine ball down the touchline to Matty Brown whose good through ball found Kaiden Goldspink to produce some good control before firing past the keeper to pull one back. Whitton soon increased the lead again with a fine strike from Lloyd Clarke from outside the area, on 39minutes Cameron Russell was brought down in the area and got up to make the score 3-2 with a well taken penalty. Hammond then sent Goldspink away down the right with a fine ball his good centre saw Russell just fail to connect. This hotly contested affair reached boiling point a minute from half time when Jack Hutchinson fouled and was shown the red card, the referee also gave the same card to Kyle Haylock followed by one to Whitton’s Lloyd Clarke following a player brawl near the touchline. The resulting free-kick was taken hastily with players and officials not ready this was headed in by Cole and surprisingly allowed to stand leaving the home team to go in 4-2 up after an eventful first half.

Soon after the break the ‘Royals’ were 5-2 down when Josh Stevens headed in from a corner after poor defending. On 55minutes Lewis Hammond pulled one back with a header onto the post and across the line. Lee Will replaced the injured Lewis Hammond on 70minutes, a couple of minutes later the central defence was decimated when Lewis Flower became the third ‘Royal’ to be sent off this for a reckless tackle, Kaine Collyer then replaced Cameron Russell this after both Russell and Bell were both shown yellow cards. The ‘Royals’ down to eight men continued to put together some good football with Matty Brown very unlucky not to score when his fine volley from some 25yards out dipped under the bar but was headed off the line. The make shift defence put in some gallant work with keeper Rix stopping all that got past it. In the dusk the final whistle went and a final 5-3 win for the home team in a very eventful match and a bad afternoon for Kirkley & Pakefield FC.

Last Saturday was a bad day all round for the club with all four teams losing, the ‘Reserves’ went down 1-0 to Thurlow Nunn Division 1 North club Cornard United in the Quarter-Final of the Suffolk Senior Cup. In the Lowestoft & District League Division1 the ‘Under 23s’ lost away at resurgent bottom club Beccles Caxton Reserves 5-1, whilst in Division 2 the ‘B’ team lost 3-2 at home to Waveney ‘A’.

This coming Saturday Kirkley & Pakefield FC have a home league match at Walmer Road when they play FC Clacton for the fifth time this season still looking for a win against them 3.00 ko. The ‘Reserves’ travel to Mundford for a league match 2.00 ko. In the L & D L Div 1 the ‘Under 23s’ play First & Last FC on Normanston Park, in Div 2 the ‘B’ team host Mariners FC on the Team Lauren Lou 3G Arena both matches have a 2.00 ko. Next Thursday 21st Feb. at Walmer Road sees league leaders K&PFC U18s playing their final league match of the season with a vital encounter against second placed Wroxham FC U18s 7.45 ko. The same evening AFC Royals should be away to 3rd placed Norwich United.
THE ROYALIST COLIN SMITH