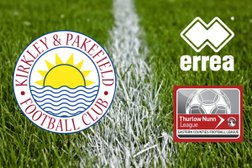 3 Points for the Royals

Last Saturday’s local ‘derby’ in the Thurlow Nunn Premier Division League at Emerald Park saw Kirkley & Pakefield FC overcome Gorleston FC for the third time this season with a slender one goal victory. On a bitterly cold afternoon it was the away team that took up the early attacking which the home defence stood up to well. The ‘Greens’ then had a spell of pressure of their own with ‘Royals’ keeper Adam Rix twice coming to the rescue with good saves, one from a well hit Connor Ingram special producing an exceptional save. On 25minutes Lewis Hammond had a good shot from 20 yards for the ‘Royals’ but the keeper saved, on 30 minutes saw another chance for the ‘Royals’ but Lee Will free kick on the edge of the area was well saved. The remainder of the half saw very little goal mouth action from either team. The second half saw early attacking again from the ‘Royals’ and on 50 minutes Miguel Lopez received the ball in the area his square pass to Will saw his shot handled in the area resulting in a penalty which Cameron Russell slammed home with confidence to give the ‘Royals’ an early second half lead, on 56 minutes keeper Rix made an outstanding save from ‘Greens’ Peter Lambert then on 62 minutes a good centre across goal from the left saw the same player fail to nudge the ball home. Player became very ragged and ugly with the referee intervening regularly which saw nine bookings Gorleston clocking up five yellow cards to four for the ‘Royals’, with five minutes remaining the ‘Royals’ looked destined for another penalty after Jordan Haverson was fouled in the area but the referee saw differently and no penalty was awarded but play was then held up with Haverson down with what looked a serious head injury, an ambulance was called which responded very rapidly, Haverson was bandaged up and take to hospital. Play then resumed some 30 minutes later for the final five minutes with the ‘Royals’ holding out for the welcome three points after two successive defeats keeping them in the top six. Haverson’s injury resulted in him having eight stitches to a head wound.

Kirkley & Pakefield FC 1st team have a rare weekend off this Saturday before starting February with a run of 5 matches in a 15 day period. The ‘Reserves’ are at Walmer Road entertaining Hindringham in a Anglian Comb. Div 1 league match 2.00 ko. In the Lowestoft & District League Div 1 K&PFC U23s are also without a game whilst the ‘B’ team are at home on the Team Lauren Lou 3G Arena against top of the table Celt Rangers FC 2.00 ko.

Last Saturday the K&PFC Reserves lost 4-1 at home to title chasing Aylsham. The K&PFC U23s draw 3-3 with Spexhall Huntsman & Hound with the ‘B’ team winning 2-1 away to Crusaders on Normanston Park.