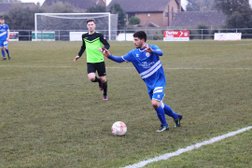 FC Clacton pick up the away win

Last Saturday’s Thurlow Nunn League Premier Division match at Walmer Road saw Kirkley & Pakefield FC playing FC Clacton for the fifth time this season and although all were close encounters the ‘Royals’ were seeking their first win of the season over their opponents. The ‘Royals’ team was decimated by suspensions, holidays and players still recovering from injuries but with this headache manager Mark Willis still assembled a respectable looking squad with Owen French and young Harry Creamer fitting into the central defence.

The first break of the match after 7 minutes saw Clacton centre forward Jake Clowsley shot well from the right his strike looked goal bound until Owen French made a fine stop sliding the ball out for a corner. On 22 minutes the away team lost a golden chance to take the lead when Billy Wales missed from close in, two minutes later they did take the lead when Harry McDonald headed in well from a left wing cross. Play was very much played in mid field but home keeper Adam Rix was forced into making a good save just before half-time.

The ‘Royals’ looked more active at the start of the second half and on 52 minutes Cameron Russell was brought down in the area, he gone up to score from the penalty spot to bring the scores back level, this only last a couple of minutes before Harry McDonald shot in for his second of the match and put Clacton back in front. Just after the restart Ross King had a finely hit 20 yard shot go just wide of the post. The away team continued to put pressure on the home defence and a slip up by full back Callum Bell allowed Jake Clowsley to increase their lead further after 65 minutes. The ‘Royals’ hit back on 72 minutes when a good shot from Lee Will was only parried by the keeper allowing Matty Brown to shot in from close range. On 80 minutes sub James Baldwin replaced Bell, in the very last minute a goal bound header from Baldwin was well saved by keeper Joe Fowler and so Clacton maintained their dominance of the ‘Royals’ this season.

This coming Saturday Kirkley & Pakefield FC travel to play league leaders Histon once again with key players not available, the match has a usual 3.00 ko. Next Tuesday (26th) evening the ‘Royals’ are on the travels again when they visit Newmarket Town in the league 7.45 ko.

The ‘K&PFC Reserves’ travelled to play Anglian Combination Division 1 league leaders Mundford last Saturday with a side mainly consisting of players from the Under 23s, they put in a spirited display in losing 3-0. On Saturday they are at home on Walmer Road to Fakenham Town Reserves 2.00 ko. The U23s game had to be called off last week due to lack of players with players being required in the ‘Reserves’ this Saturday they are on the Team Lauren Lou 3G Arena in a Mick Johnson Cup match against Division 2 side Waveney ‘A’ 2.00 ko. The ‘B’ team lost narrowly 2-1 to Mariners last week but do not have a match this week.

With the mid-week U18s youth league drawing to a conclusion present East Division league leaders K&PFC U18s could only draw with third place Norwich United 1-1 last Thursday evening. This Thursday they play their last league match of the season with a mouth-watering clash at Walmer Road against second placed Wroxham in a match they must win. Next Thursday (28th) evening sees them again in home action with an intriguing Suffolk FA U18 Mid-Week Boys Cup clash against unbeaten AFC Sudbury runaway leaders of the South Division, come and give the boys your support in a 7.45 ko. AFC Royals play at Bungay Town on the Wednesday evening in a league match.