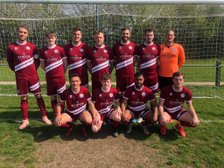 Away win for the Royals

Easter Monday afternoon saw Kirkley & Pakefield FC make the short journey to play all ready relegated Framlingham Town FC in their penultimate game of the season. The ‘Royals’ recalled Jordan Haverson with Jack Hutchinson dropping to the bench in any otherwise unchanged team, ‘ The Castlemen’ promoted last season will finish bottom of the premier division this season. The match was played in baking hot sunshine on an unexpected poor playing surface with the bumpy pitch not being helped by the long grass making it difficult for both teams to play good passing football. The ‘Royals’ opened attacking with Russell just missing an early header, Haylock was put through beating the offside trap but shot at the keeper. For the home team Mason Ransome free-kick was well saved at the near post by keeper Rix. We then saw some great play by Haylock running over half the length of the pitch beating three defenders on his way but his centre was well stop by the home keeper Gary Rose. Haylock was then denied a penalty when he looked to have been brought down by the keeper this on 20 minutes. The ‘Castlemen’ then had a free-kick outside the area with Alex Ling shooting low and keeper Rix saving well, on 29 minutes a ‘Royals’ free-kick saw Lopez hit the post with the ball going across goal out to safety, on 34 minutes centre forward Danny Smith shot across goal missing the post for the home team, then on 39 minutes a powerful Lewis Flower header forward for Cameron Russell to run on to saw his slick shot past the keeper to put the ‘Royals’ into the lead. The second half saw an eventful start when Framlingham’s Matthew Aldis handle in the area, surprisingly Lopez stepped up to take the spot kick but this was saved by keeper Rose. Following a scramble in the away area Lopez got the ball away for a corner, on 58 minutes a good shot from 25 yards by home centre forward Smith went just wide of the post. Goldspink had a free shot on goal but shot wide. With 15 minutes remaining Matty Brown came on for goalscorer Russell, a good ball by Haylock to Brown saw the keeper rush out to clear, then after a free-kick Herbert had a header cleared off the goal line. With time almost up Rix caught a high cross to see the ‘Royals’ to a narrow victory which should assure them a healthy fifth place finish with one game remaining.

Kirkley & Pakefield 1st team conclude their season this Saturday with an away match at Walsham Le Willows currently in 9th place with a 3.00 ko. The ‘Reserves’ play Reepham Town their final match at Walmer Road 2.30 ko.