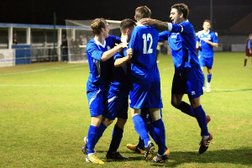 Royals Bounce Back In Style

The Royals bounced back from their defeat at Hadleigh United with a 5-3 win over Thetford Town.

Jamie Godbold made changes to his team from their defeat at the weekend. He started new signing Elliot Hunter to play just in front of Tarren Grint as well as bringing in Kieron Baldwin into the midfield. Kyle Baker was also in the starting 11.

It took just 6 minutes for the ball to be in the back of the net, but unfortunately it wasn't for Kirkley & Pakefield. Thetford Town were ahead with a goal from James Pipe. Tarren Grint went on an impressive run down the wing, passed to Kyle Baker whose shot was saved by the goalkeeper, Taz was there to collect the pieces but hit the bottom of the far post and Thetford cleared their lines. Kirkley sat back and it didn't take long for Thetford to double their lead. A cross in from James Pipe to find Wayne Proctor just yards from goal who guided the ball home. 2-0 inside 17 minutes.

Everyone around the ground was thinking this could be a repeat of Saturday, which no one wanted. Kyle Baker was there every time getting into the Thetford defence and trying to get the scoreline level. Chance after chance the goalkeeper saved, it seemed like it wasn't going to be Kirkley & Pakefield's night.

Then on 43 minutes, a corner taken by Baker found Ross King in the box who slotted home for 2-1. The Royals were making a come back and it started now. Just a minute later, Ross King scored his second after a decent pass from Elliot Hunter. 2-2 before half time and the lads had their heads up going into half time.

Second half and the lads looked hungry for victory. Thetford had the kick off but The Royals got possession straight away, a pass finds Kyle Baker who curls the ball into the top corner. 3-2 after 47minutes. Things seemed to be going right for the lads once again.

Tarren Grint moved onto the right wing and his game improved. He was making run after run and setting up chances for the other lads. Hunter came off just after an hour and was replaced by Gabriel Mansbridge at the back. A moment of magic for young Kieron Baldwin who made the score line 4-2 after 67 minutes. He made the run down the middle of the field and just outside the box he chipped the ball over the goal keeper. Now The Royals had their confidence back.

Kyle Baker had a chance when he closed down the goal keepers clearance but the ball rolled just past the far post. Fans around the ground thought it may have been in.

Hearts began racing when Thetford had a chance shot from range which bobbled underneath the goalkeeper to make it 4-3 close to time. The Royals didn't seem too phased by the goal and they kept the pressure on and kept making chances. The chances finally paid off when Max Kirkby lifted the ball over into the path of Kyle Baker who cut inside to slot the ball home for 5-3 after 88 minutes. The Royals played well after such a defeat at the weekend.

The Royals are away this Saturday to Tilbury FC in the FA Cup. Kick off 3pm.