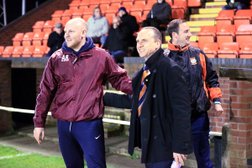 Mike Derbyshire’s brief honeymoon as the new Diss Town Manager came to an abrupt end at home to Kirkley & Pakefield on Tuesday night.

His side halted a 13-game win-less streak with victory over Woodbridge Town on Saturday but the new man at the helm had very little time to enjoy the moment before he was mercilessly reminded of the size of the task he faces.

However, Derbyshire was quick to pin the blame on himself for a first 25 minutes against Kirkley that saw his team essentially blown away.

“We were forced into a change and so I wanted to try something new, I wanted to get us playing” ‘The Tangerines boss said. “It didn’t work and that’s my fault, no-one else’s.”

What he is no doubt referring to is the unfamiliar 4-3-1-2 set-up with which Diss began the game. The formation paid some dividends in terms of their ball-possession, retention and attacking options. But it gave ‘The Tangerines’ a very narrow shape which Kirkley ruthlessly exploited at times.

‘The Royals’ were in front as early as the second-minute after they won a corner on the left following a rapid move that had Diss outnumbered in the flanks on the first of several occasions in the opening stages. The initial ball in was dealt with fairly effectively but the clearing header dropped to Kirkley’s Kyle Baker on the edge of the penalty area and ‘The Tangerines’ defence failed to close him down. Baker was given far too much time and space and he unleashed a vicious drive that took a slight deflection – enough to send the ball into the top of the net just inside Diss goalkeeper Joe Gill’s left-hand post.

For the next 20 minutes, Diss enjoyed some decent spells of possession and put together some tidy play. But the threat from Kirkley’s rapid counter-attacking was ever-present. Every time the visitors worked the ball across midfield and wide, Town struggled to get numbers over to deal with the danger.

Nevertheless, it was a set-piece that once again proved the home side’s undoing as a corner was allowed to ping-pong around the box before a low drive seemed to strike the foot of Gill’s right-hand post. ‘Royals’ central defender Jack Herbert then managed to get to the loose ball ahead of the sprawling ‘keeper and Diss defender Roscoe Hipperson’s attempted challenge to stab Kirkley into a 2-0 lead.

And before ‘The Tangerines’ could draw breath, it was three. This time Town were cut open right down the middle by a swift passing move that left David Tarawali with time and space to pick his spot from 16 yards and effectively end the game as a contest.

After conceding two goals in three minutes, Diss Manager Derbyshire was compelled to revert to a more orthodox 4-4-1-1 system simply to shore-up the home side’s defensive cover and whilst this did virtually nullify his side’s attacking options, it allowed Town at least to see out the half without conceding further.

But to compound their miserable first forty-five, Captain Mark Shadrack picked-up a dead leg just before the interval and that ended his night.

Shadrack’s injury meant a debut for newly-signed Acle United skipper, Luke Goreham, who has joined Diss on a dual-registration. Goreham came in at leftback with Max Kirkby switching across to the right of the back four.

However before the home side could begin the task of trying to overhaul a mountain of a deficit, they suffered another setback when midfielder Jacob Brown was somewhat harshly given a straight red card – the referee deeming that Brown had led with his elbow in a late challenge on Tarren Grint.

Down to ten-men and with a recent track-record of fragile confidence, some might have expected a second-half collapse from Diss and a result akin to the 11-0 drubbing they took at home on Boxing Day 2013 against near-neighbours Walsham-le-Willows. But the home side will have given their new management team some cause for optimism as they reacted with character to the situation.

No doubt Kirkley will say that they ‘took their foot off the gas’ but certainly Diss, forced to adopt a 4-4-1, with Adam Burroughs dropping from the ‘number 10′ role into central midfield, gave a decent account of themselves under the circumstances in the second period.

Despite their numerical advantage, Kirkley were only able to fashion a very few opportunities worthy of note and those chances that did come their way were matched in number by a couple of possibilities for the hosts. Indeed it was Diss who went closest first when Matt Dixon was left unmarked at a corner and should really have done better with his header from eight yards out which failed to troubled Hayden Rodgers in the Kirkley goal.

‘The Royals’ Tarawali did then draw a smart tip-over from Gill midway through the half but at the other end, Rodgers was also fully-extended as he got down sharply to his right to turn away a later effort from Josh Curry, with the rebound just evading the in-rushing Dan Easlea.

Kirkley made changes as the half wore on with first skipper Jack Herbert and striker Ricci Butler withdrawn in a double change that saw Ross Gilfedder and Nathan Russell introduced to the action. Lewis Flower would join them later. Gilfedder proved a handful in spells and it was his work that created an opportunity for Williams cutting in from the left but the Kirkley midfielder blasted high and wide.

There was another scrappy chance towards the end when Gill, who had struggled with crosses for much of the evening, failed to gather again and the ball ran loose across the six-yard-box. But with the aid of his defenders, the 17-year-old ‘keeper was able to recover and fall on the ball at the second attempt with two ‘Royals’ players closing-in for the kill.

Overall, it was not an inspiring second-half and Kirkley will be disappointed not to have capitalised further on their half-time lead. That said, they will surely argue that the damage was done in the first 25 minutes.

‘The Royals’ are back at Walmer Road on Saturday as they take on league-leaders, Hadleigh United. Certainly Kirkley will be able to go into the game with renewed confidence after this display.