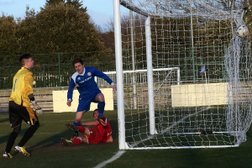 Kirkley & Pakefield secured their first win in nine games and inflicted a fifth defeat in six on visitors Haverhill Rovers at Walmer Road on Saturday. Rovers have enjoyed a tremendous first-half of the season so even their recent run of poor form – including today’s defeat – means they remain in the top six in the Thurlow Nunn ECL Premier Division. But they looked anything but pacesetters in the early stages of this encounter. To be fair, it was a decidedly uneventful first 45 minutes as a whole with Kirkley struggling just as much to create any real opportunities. Jamie Greygoose, in the Haverhill goal, was only called into action for the first-time on the half-hour mark when he stretched to turn away Kyle Baker’s freekick.

But it was, nevertheless, the home side that did break the deadlock eight minutes before the interval. Haverhill failed to properly deal with or clear a Kirkley attack and the ball eventually found its way to ‘Royals’ centreback, Jack Herbert, 12 yards out. And he swept a shot across goal between the diving Greygoose and a defender on the post to give the home side the edge.

A rare strike from the tall defender but no less welcome to the Walmer Road faithful for that.

Having gone in front, Kirkley looked to take the game to the break without conceding and did so with relative ease.

The second period started in equally quiet fashion, with neither side able to stamp their authority on the contest. That said, Kirkley remained fairly untroubled and it looked increasingly like one goal would be enough for them to see out the match. Indeed it wasn’t until Haverhill’s Greg Strong had his 25-yard drive pushed behind for a corner with the final quarter of the game approaching that Rovers came to life. Jack Wilkinson’s ball in led to a mix-up between Kirkley goalkeeper Aian Anderson and one of his defenders which allowed Haverhill substitute, Luke Parkinson, to ghost in at the far post and level things up. Parkinson was able to steer his shot – with the helop of a slight deflection – between two ‘Royals’ players and into the net.

The visitors seemed to sense that despite looking well below par for much of the match, there was a chance here not only to take a point but possibly to walk away with all three. They began to take the game to Kirkley – only to find themselves behind again five minutes from time.

As the home side too looked for the goal that would surely win the game, ‘Royals’ substitute, Ricci Butler, played a neat ’round-the-corner’ pass inside the Haverhill box and found Kyle Baker in space. Baker’s low shot beat Greygoose but was stopped on the line superbly by the sliding Rory Thompson. But Thompson’s heroics were in vain as he looked up to see another Kirkley substitute, Nathan Russell, following in and Russell drove the ball into the roof of the net.

There was little time for a response from Haverhill and so Kirkley were able to secure what is a vital win.

The three points takes ‘The Royals’ up a place from 13th to 14th in the table. It is also probably enough to secure their Premier Division status for another season, even at this early stage. There may be only four places between Kirkley and the relegation zone but the points gap is now at 15 – which, bearing in mind the form of most of the sides below them, looks considerable to say the least.

Haverhill stay 6th but having had such a fine start to 2013/14, that is likely to be viewed at this stage as disappointing. They are a staggering 22 points adrift of leaders Hadleigh United and have also played several more games than a number of the teams around them.