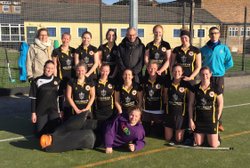 Knutsford ladies travelled to Runcorn on Saturday knowing they were in for a tough game against a well drilled side who beat them 12 – 0 at home in one of the opening matches of the season.

Unfortunately, several regular players were unavailable due to the continuing injuries that have plagued the team this season. However this offered another opportunity for the more junior girls to step up and play for the 1st team.

The game started with Runcorn on the offensive from the off. Within minutes junior, Lily Wasilewska was struck on the ankle with a hard-hit ball and hobbled off meaning Knutsford were down to the bare 11 players. Knutsford were under constant pressure from the Runcorn team who peppered the Knutsford ‘D’ with crosses and dangerous passing. However the Knutsford defence held strong and worked together to move the ball out from the danger areas and up into midfield. New to the team this season, Rachel Sims and Katie Welch on the right held their own, intercepting the ball in defence and working it up the pitch. Unluckily, for Welch, a Runcorn player caught her in the knee on the follow-through of their hit and the game had to be paused while she received treatment and was helped off the pitch. Knutsford were down to 10 players.

Runcorn capitalised on the extra player and were piling the pressure on in the Knutsford ‘D’ with repeated attacks and shots on target. Despite Lucy White in goal making fantastic saves and central defender Steph Roberts clearing a mid-air ball from off the line, Knutsford found themselves 3-0 down at half time.

The second half continued in the same vein, with repeated pressure from Runcorn. Welch bravely came back on to even up the numbers and there were some fantastic passages of play down the right between her and Andrea Hill who made her debut and caused the Runcorn defence some issues. The entire Knutsford team pulled together and had some good spells of possession with the midfield working tirelessly to support the new juniors in attack and the more seasoned defenders at the back. However under the relentless pressure, and countless short corners for Runcorn, some more goals were conceded. The game ended 8-0 with Knutsford showing great determination and spirit to the end.

Man of the match was awarded to Andrea Hill for her great attacking spirit and for getting truly stuck-in on her debut. The opposition awarded man of the match to Lucy White in goal for her fantastic performance and preventing what could have been a much higher score line!