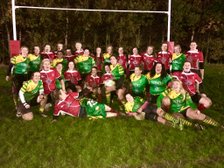 With the cancellation of the Norfolk Cup game, the Lakenham Ladies were looking for any excuse to get their boots on this Friday night. New local team Crusaders were happy to get a bit of game time and came over for a Friday Night Lights training game.

The evening started with 20 minutes of "conditioned play". For the first 10 minutes the ref was biased towards Crusaders, allowing them 10 minutes of constant attack. This was a great chance for the ladies to practice their pod work and getting set at rucks. With some borrowed players to help make up their 6-woman scrums, Crusaders seemed to really enjoy contesting for the ball. The Lakenham defence was strong though, and despite some good runs Crusaders just couldn't quite break through.

The second ten minutes of conditioned play gave Lakenham the upper hand as they got their chance to attack. Big runs from experienced players brought an early try, but Crusaders kept their heads high and reset. The new team really worked in getting low for those tackles and setting up the defensive line from rucks. Lakenham looked well organised and confident throughout, despite almost the entire team trying out new positions.

After a short break, and swapping the two borrowed players, the ladies reset for some real game play in two 15 minute halves. Crusaders received the kick and went on the attack, making some confident runs. Lakenham were messy around the rucks and the penalties came flooding in. Crusaders opted to kick for 3points when one came near the post, and took the lead. Crusaders were dominant in the scrums, turning over the ball more than once. A stern talking to from Lakenham's captain for the evening saw the ladies in red calm down their play and focus on clean rucks, low tackles and strong runs during the second half. The scrums became more even as the Lakenham players settled in to their new positions, and fast moves from the number 9 helped to secure two tries for the home team in the second half.

Both teams learnt a lot from the evening. For Lakenham it was great to have more experienced players trying out some new positions, and for the newer ones to get some live game play under their studs. It was also really lovely to see how well Crusaders are doing as such a newly formed team, and we look forward to playing them again in the future!

Thanks to all the players, coaches and supporters who came along, and especially to Dan and Misha for sorting the bar and food.