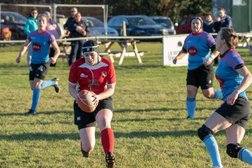 One of the newer members of Lakenham Ladies tells us all a bit more about herself this week.

Red Josie joined Lakenham for the first Epic Pre-season in 2018. She proved herself on the pitch making strong runs and just being generally fierce. She also has a softer side, scoring tries like she's gently laying a baby in a crib. We sadly lost her to some kind of secret Indiana Jones mission for part of the season, but she's back again, key member of the Second Row Posse, and killing it.

When did you start playing rugby and why?
I started playing last year because I wanted to try something new and meet new people. Best decision I ever made!

Can you remember your first training session or game with Lakenham?
I remember my first game. I went on about 20 minutes in, and as I was walking on I starting putting my (borrowed) scrum cap on back to front. The opposition must have been terrified.

What do you like to eat before a match?
I always have mushrooms on granary toast with a poached egg in the morning. It's almost a superstition.

How do you calm your pre-match nerves?
I just put on my lucky pants and avoid thinking about it!

What training sessions or drills do you like best?
I like Dee's creative HIITs and handling drills because I'm no good at them, so it feels like an achievement when I get it right.

What three qualities are most important for succeeding in your position or rugby in general?

What has been your favourite rugby social?
I love our book group, but my favourite has to be our 12 pubs of Christmas crawl. I seem to remember JBakes taking a selfie with a pigeon for one of the challenges.

What do you do outside of rugby?
Rugby is my cool hobby, but I like keeping fit, socialising, and the arts.

Finally, can we have two truths and one lie?

If you'd like to see Josie in action head to the club on Sunday for a 2pm kick off as the Ladies take on Harwich in what is set to be an exciting match.