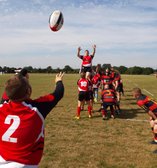 Match Report for Wymondham VS Lakenham

Lakenham Hewett opened their season with a tough fixture away at old rivals Wymondham.

Even with an 11am kick off the temperature was already 20c+. Now there are many negative impacts of global warming, however watching 3 helpless gingers burn in the sun adds a rather comedic value to proceedings.

In the early exchanges it was a struggle to seperate both sides, discipline was the key to this game however both sides didnt get the memo and gave away multiple penalties at the breakdown, you could hardly blame us when our front rows IQ added up to an astonishing 3!!!

Lakenham started to assert dominance up front and opened the scoring halfway through the first half, a fantastic effort from the pack resulted in clean ball for the backs, the ball was shifted through the hands resulting in a score for Ash Johnson. Unfortunately Kristian Boreham was unable to add the extras- he is currently being sentenced by a kangaroo court to undertake a 6 hour lecture on the art of kicking by Andy Pullinger.

Wymondham continuously threatened throughout the game, and had a considerably strong backline. Wymondham provided the all decisive score on the last play of the first half in what was probably the scrappiest 2 minutes of rugby ever seen- multiple turnovers between sides resulted in a breakaway score by Wymondham unfortunately they added the all important extras to take the halftime lead at 7-5.

Over the years Lakenham have had a tendency to let their heads drop once they go behind. However this team showed tremendous heart in the second half with fantastic defence! Graham 'The great Grahomi' Cook particularly standing out, a man with so little cartilage he could claim enough disability benefit to appear on the Jeremy Kyle show. The scrum was continuing to operate effectively with a particular mention going to our front row- who although unevolved continued to put pressure on the Wymondham scrum.

Our resident Chimp Karl Woolf was unfortunately carried off with what appeared to be a serious head injury- well, so we thought.. Currently he is 12 pints down at the beer festival and is flirting with the lady serving hot dogs (true story).

Unfortunately Lakenham could not find that elusive score which won the game... however there were many positives to take away;
Fantastic debut performances from Jamma Fitch, Harry, Munashe- our overseas from Zimbabwe!!

A worthy mention also goes to Mark Butcher as well who stepped in at scrum half in the first half- a man so old he had a sex scandal with Blackbeard the pirate!!!

Dan Baker
Team Captain and all around great guy....