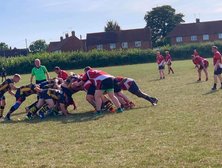 Lakenham travelled to Ipswich today to finish their preseason preperations ahead of the opening league fixture next week against Lowestoft and Yarmouth.

Some of the Lakenham boys are a fairly average bunch, it was particularly concerning that all of the front row brought their passports with them as,and I quote 'Suffurk is like a difwant place innit', (I really feel like Im doing a good deed by keeping these people away from normal society).

Lakenham were bolstered by the return of the experienced Dorian Squires who was away on a top secret communist training camp in Cuba- errr dont tell anybody that..... Lakenham were missing a plethora of players due to a mixture of injury and work commitments, totalling up to 12-13, however it was another massive positive that we still managed to turn out a squad of 17- more people than the 1 person who attended my birthday party last year (Yes that one person was me).

Today was a chance for our fringe players to impress and have a good hit out (No Damo, Fringe player doesn't mean they have to have a fringe), Lakenham unfortunately started poorly by giving away the ball on the first phase of play and allowing Ipswich an easy 5 pointer. Due to the heat we played 4 quarters of 20 minutes- due to the fact the forwards couldnt count I just told them to keep running around until the whistle blows!!
Lakenham produced a rather disjointed display in the first couple of periods by not protecting the ball and a lack of communication in defence, however our Zimbabwean magician Munashe saved Lakenham countless times with some phenomenal tackles. Lakenham's set piece was beginning to impress themselves upon Ipswich with a particular mention to Warren Hughes who was phenomenal in the lineout and the accuracy of Lewis Woolf's throwing drew comparisons with the likes of Rory Best.... Except hes not Irish, Not a farmer and isnt bald....

Lakenham produced a much better performance in the last two quarters of the game, a particular highlight was Lakenham's first try of the match, Munashe picking up in open play and using his pace to burn the Ipswich defenders and touch down in the corner- Munashe has been fantastic since escaping political turmoil in Zimbabwe and suddenly finding himself in a city where the biggest political issue is the local bulldog sh*t*ing on people's doorsteps!

As the game drew to a close Lakenham were driving closer and closer to the line, with Dan Baker taking a tap penalty right to the line only to be held up, fortunately Mike Fox (standing in at scrum half) managed to get the ball out quickly to Munashe who scored his second try of the game, A WINGER TAKING A CRASH BALL I HEAR YOU SAY!!! THE LAST PERSON TO DO THAT ENDED UP ON PIZZA HUT COMMERCIAL- DIDNT END WELL FOR HIM THOUGH....

So the final score was 46-12 to Ipswich who were absolutely fantastic hosts, a big thankyou to the ladies who came to support, the Ipswich players were really impressed with the support shown, and even more impressed when I claimed you were all part of the Dan Baker Appreciation society!!
Ipswich also provided beer for us after, a fantastic gesture especially as Ginger Tom thought he had to sleep with people in order to get a free drink...