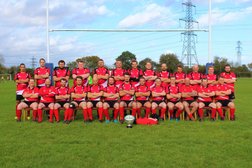 Lakenham hosted their annual VP dinner at Hilltops this weekend, essentially this is a chance for a lot of pensioners to get absolutely paraletic and debate key issues of the world including; When was avocado invented Is non-Binary a type of Jumper and Why do people wear coloured boots!!

Lakenham also welcomed back to former boys who were playing for Norwich, Mark Walton and George Holdgate- their treachery has eclipsed what Judas did to Jesus, and just to illustrate how angry we are, we have even put Bosnian war criminal Slobodan Milosevic above them in our Christmas card list.

Lakenham were bolstered by the large support, including representatives from our key sponsors and across all sections!!!

Lakenham started brightly, however within 2 minutes Lewis Woolf sustained a head injury and was forced off the field... YES, YOU CAN SAY WOOLFY LASTED 2 MINUTES!!
Lakenham were the first on the scoresheet after a fantastic line from Graham Cook penetrated the Norwich defensive line, and saw him score under the posts. Overseas enigma Munashe Chibinjana adding the conversion.

Lakenham recevied a further blow only a few minutes after as captain Dan Baker was sin binned for the lack of arm movement... 'THAT WASNT ILLEGAL IN OUR DAY' EXCLAIMED THE VETERANS FROM THE TERRACE, yes but consuming alcohol during the prohibition was!!
Lakenham continued their dominance with Harry Watkinson- the worlds poshest man (Mainly because he doesnt swear and hates Princess Diana) scoring the first of his two tries!!

This was proving to be one of Lakenham's better attacking performances this season, so much so that even our resident Steve McDonald lookalike Damian Brook (Check the receding hairline, its atrocious) picked up his first ever Lakenham try- it only took 3 seasons Damo.. TRY VIRGIN!!! I have tried to describe Damian Brook in a number of ways this season, but my personal favourite is 'If he were a soft drink, ht would be Orange Squash and Diet Coke mixed together' Finally Munashe Chibinjana finished off an outrageous offload from club stalwart Dorian Squires to put Lakenham 24-0 up at the half!!

Lakenham had a scrappy first 15 minutes in the second half, however they were rewarded with a sustained period of pressure with a try from Captain Dan Baker, who ran through three tacklers to touch down. Not to be outdone, Graham Cook added a brace, proving his worth at inside centre, a man who wears pokemon T Shirts would be humbled to be compared to his childhood hero Pikachu's attacking prowess.

The excitement was not over however!! Damian Brook was carded late in the game for pushing the opposition off the ball- Damo claims that he 'Pushed him so hard he knocked him out'.
Lakenham were not affected by the lack of Mr Damo however and picked up a further try through a pick and drive from Harry Watkinson.
The final try of the game went to Dan Baker, a phenomenal run whereby Dan ploughed through one tackler proved to be try of the game (Dan claimed that he ran from the halfway line, however he scored from 3 metres out)

Honorable mentions to debutants Jack Codling and Oliver Jordan who were fantastic, and another solid performance from Jamie Cook.

Will Bartlett was man of the match by a country mile!!

A big thankyou to our sponsors, VP's, Ladies etc for your support!!

Also a big thankyou to Norwich for playing us!!